Delhi, Chandigarh to be totally urbanised by 2036 while it will be 92.8% in Kerala, a study has found.

NEW DELHI:  The urban population in the country, which was 31.8% in 2011, is expected to increase to 38.2% by 2036. Likewise, the urban growth would account for about three-fourth (73%) of total population increase by the next sixteen years. 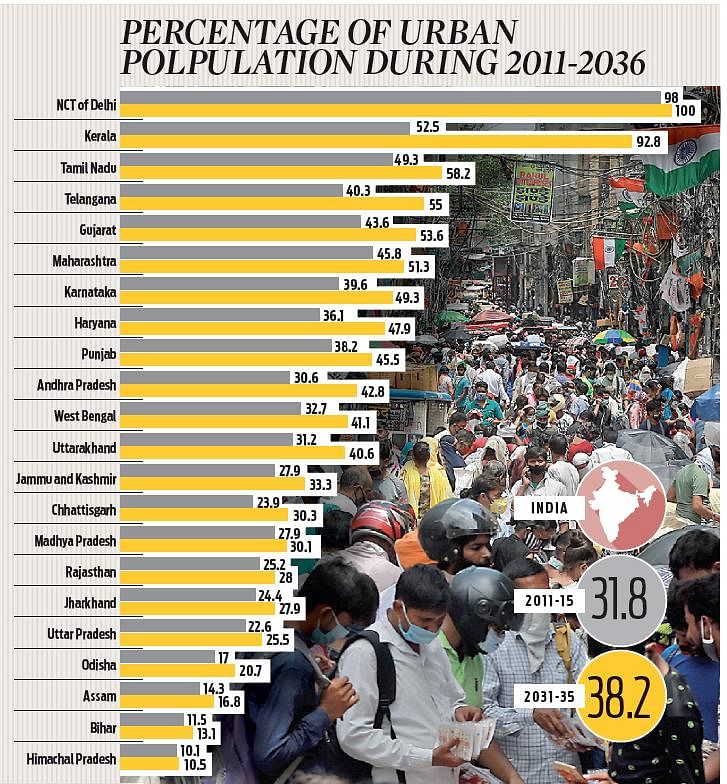 The facts have come out in population projections of India and States (2011-2036), a report prepared by ‘Technical Group on Population Projection’. It said that out of the total population increase of 31.1 crore during 2011-2036 in the country, the share of increase in urban population is expected to be 21.8 crore.

Southern states Kerala, Tamil Nadu and Telangana will record more people living in urban areas. Share of urban population will grow substantially in Kerala from 52.5% to 92.8%. Similarly, Tamil Nadu and Telangana will record rise from 49.3% to 58.2% and 40.3% to 55% respectively. Gujarat and Maharashtra are also expected to have a large share of population living in urban areas.

The share is expected to rise from 43.6% to 53.6% in Gujarat and from 45.8% to 51.3% in Maharashtra.
While the Ministry of Urban Affairs have many urban transformation schemes including Smart City Mission, AMRUT and others, large urban concentration in these states call for proper implementation of such schemes. Many of the urban schemes have recorded slow pace so far as completion of projects are concerned.

More from Nation.
Now we are on Telegram too. Follow us for updates
TAGS
Urban urban population