The party, however, did not announce as whether it would merge with any other party or become part of some other alliance.

PATNA: It was a bright day for the ruling JD-U in poll-bound Bihar on Thursday: In twin-raids on the opposition ‘Grand Alliance’, it succeeded in luring away the father-in-law of Tej Pratap Yadav, Lalu Prasad’s elder son, and on the other, it found to its glee that the Hindustan Awami Morcha (HAM) has exited the Mahagathbandhan.

Besides Lalu’s ‘samdhi’ Chandrika Rai, those who left the RJD to join the Nitish Kumar-led JD-U belong to the Muslim-Yadav equation, a formidable combination in Bihar’s complex caste and religious politics.
Those in search of greener pastures include RJD’s Feraz Fatmi (MLA from Koeti in Darbhanga), Jaivardhan Yadav (MLA from Paliganj in Patna) and Chandrika Rai (MLA from Parsa in Saran). 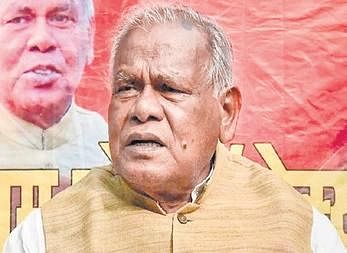 So far, six RJD MLAs have joined the ruling JD-U in the last few days. The RJD’s worst loss was Chandrika Rai. Accusing the RJD leadership of being arrogant, he said: “It is no longer a party for the poor. I express my full faith in Nitish Kumar, who has transformed the state from being poor to prosperous in the last 15 years”.

JD-U’s senior leader Vijendra Yadav later gave Rai and others the primary membership of the party. As if the desertion wasn’t enough, the RJD-led Mahagathbandhan was jolted by HAM’s revolt. The Jitan Ram Manjhi-led party was upset with RJD for not forming a coordination committee.

“When the Mahagathbandhan’s major partner has failed to do justice to its own ally, how can it dispense social justice to the people of Bihar? The people now know the RJD’s political character,” said HAM spokesperson Danish Rizwan, making it clear his party would no longer be in the ‘Grand Alliance.’
He said Manjhi, a former chief minister, has been authorised to decide whether to join the ruling NDA in Bihar.

Reacting to the new round of defections, Congress leader Rajesh Rathore accused Nitish Kumar of being instrumental in the “MLA loot”. “What Nitish is doing is akin to what a poor student does by adopting unfair means in exams,” Rathore quipped. An angry RJD has vowed retaliation soon. “If the JD-U has taken our three MLAs, we’d respond by taking 30 from JD-U,” said party spokesperson Chitranjan Gagan.

Will Manjhi return to NDA? Probably, say analysts
Though the opposition party did not declare which coalition it will align with after walking out of the RJD-led Grand Alliance, close watchers of the evolving political scene in Bihar said Manjhi could veer towards the Nitish Kumar-led NDA coalition once again.