As the Rajasthan Housing Board took a big leap this week, its Commissioner Pawan Arora got a big boost from CM Ashok Gehlot .

Word of praise for RHB Commissioner
As the Rajasthan Housing Board took a big leap this week, its Commissioner Pawan Arora got a big boost from CM Ashok Gehlot . After the foundation stone laying and inauguration ceremony, Gehlot was effusive in his praise of Arora. “Every person dreams of having his own house. We are committed to fulfill this dream of people.” Earlier the RHB was seen as a white elephant by the previous government which had almost closed it, Gehlot added. But with the will of the present government and dedication of the officers and staff of the RHB, the Board has got a new life, he said. 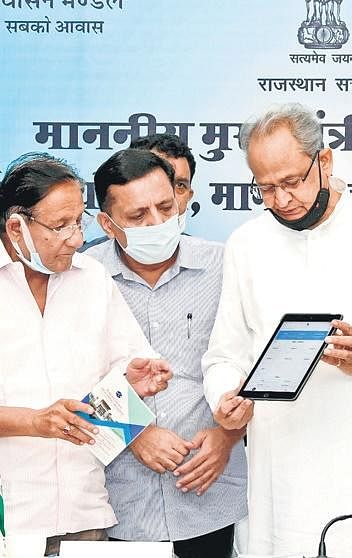 Art, culture secy conducts special astrology session
In Rajasthan, Art and Culture secretary Mugdha Sinha was seen recently in a special role. Mugdha, the Literary Secretary of the state IAS Association, was seen in conversation with Vedic astrologer Medha on a live chat on the IAS Literary Society Facebook page. During the lively chat, Medha asserted that astrology is like a user manual guide and it’s much older than astronomy. The session became interesting since Mugdha is knowledgeable in this field. During the session, Mugdha also revealed how planets influenced her life during various dashas. Overall, in her new role, Mugdha was able to present a refreshingly different session this time that got much applause from astrology followers for her in-depth knowledge of astrology.

Another bureaucratic reshuffle in Rajasthan
As soon as the Rajasthan political crisis got over, CM Ashok Gehlot surprised everyone by going in for a major reshuffle of bureaucracy. Besides shifting two Additional Chief Secretaries (ACSs) and a Principal Secretary, 11 new IAS officers were given their first postings. The most talked-about transfer is that of ACS Rohit Singh, who was shifted from the Home to Panchayati Raj Department within 46 days. Similarly, Abhay Kumar was shifted from IT to transport and he will also handle the DPR. ACS Rajeshwar Singh was moved from Panchayati Raj to Tribal Region Development Department.

Pilot attends event, Gehlot missing
On the 76th birth anniversary of Rajiv Gandhi, Sachin Pilot visited the PCC office in Jaipur for the first time since his revolt in mid-July. At the PCC office, Pilot was welcomed by the man who has replaced him as state Congress chief, GS Dotasra. Pilot congratulated his successor, and the two were seen smiling and holding light-hearted talks. But there is one notable absentee — CM Ashok Gehlot. It was learnt that Gehlot called off his visit at the last moment, triggering a fresh round of speculations in political circles.