A marked variation was noted among states with respect to the average monthly household income of agricultural households.

NEW DELHI:  An analysis of government data reveals only a marginal improvement in farmers’ income in the country during the NDA rule as compared to the previous UPA dispensation.

NSSO has not conducted any survey on income per agricultural household after 2013.

A marked variation was noted among states with respect to the average monthly household income of agricultural households.

Agricultural households in states like Punjab, Haryana and Kerala (see map) reported maximum levels of income, which indicates that this sector is making a sizeable contribution to these states’ economy.

On the other hand, agricultural households in states like Jharkhand, Andhra Pradesh and Uttar Pradesh reported average monthly incomes of less than Rs 7,000 each.

“If you adjust the increase against inflation, the farm income remains static or even shows a decline over the years,” he said.

The NABARD survey gave more insights into the financial condition of farmers and the relation it has with the size of their land holdings.

In absolute terms, the income from cultivation showed a marked increase by size class of land possessed, with households having the land size of more than 2 ha earning over 13 times from the same source for households with less than 0.1 ha of land.

This may directly be attributed to greater production potential and thereby higher profitability because of the scale of cultivation undertaken on the land available.

Agricultural households with more than 2 ha of land earned close to twice the amount earned by the ones having marginal landholdings.

For households in the size class of less than 0.1 ha, wage labour was the most prominent source, with the average contribution of Rs 3,508 to the total income of Rs 8,136.

Government/private service emerged as the next most preferred source with the average contribution of Rs 2,192, followed by livestock rearing (Rs 1,345).

According to the NABARD survey, the agricultural households showed a greater dependence on multiple sources, with 50% reported to have two sources of income, while close to 40% depended on more than two sources for income. It showed that income only from agriculture was not enough for the households. 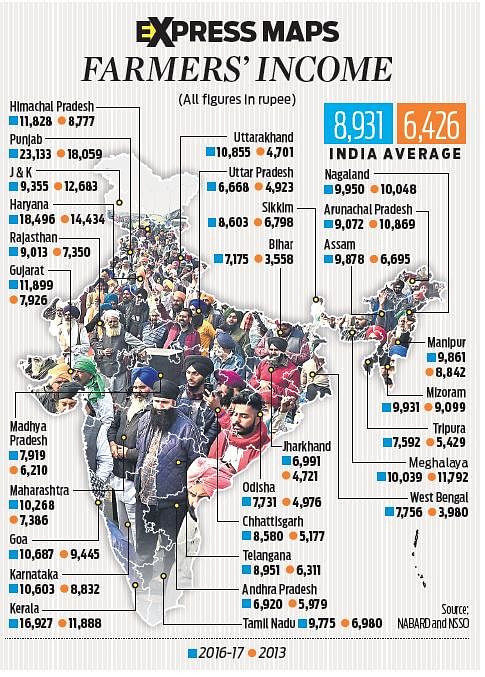 A lawyer from Punjab allegedly committed suicide by consuming poison a few kilometres from the site of a farmers’ protest at Tikri border.

Amarjit Singh from Jalalabad in Punjab’s Fazilka district was taken to the PGIMS in Rohtak where doctors declared him dead on arrival, police said.

In a purported suicide note, Singh said he was sacrificing his life in support of the farmers’ agitation so that the government is compelled to listen to the voice of the people.

The Uttarakhand Police has registered case against over 1,000 farmers who marched towards Delhi after breaking the barricading. Daleep Singh Kunwar, SSP, US Nagar said, “Inquiry in being conducted. The case has been registered under various sections of IPC.”

Farmers, who were marching to Delhi to join the farmers’ agitation, clashed with the police in Udham Singh Nagar district on Friday. A footage had surfaced in which a tractor is pushing over a police barricade.

Delhi Chief Minister Arvind Kejriwal on Sunday appealed to the Centre to repeal the new farm laws and said farmers are protesting for their survival and also said that there should be a open debate between the parties.

“I challenge any Union minister to debate with farmers on agri laws, it will be clear how beneficial or harmful the laws are,” said Kejriwal, who visited the protest site for the second time. He paid his first visit on  December 7.

Now we are on Telegram too. Follow us for updates
TAGS
NABARD National Sample Survey Office Farmers Protests Farm Laws