Over 2,000 people died between June & October amidst floods, the highest toll due to climate change-induced weather events

NEW DELHI: The floods in India this year were the fifth most expensive extreme weather event in the world, costing the country $10 billion, a report said on Monday.

More importantly, as many as 2,067 lives were lost during the June-October floods, the highest number of fatalities due to climate change-induced weather events this year, said global NGO Christian Aid in its report The Cost: A Year of Climate Breakdown, where 15 of the most damaging extreme weather events globally in 2020 were studied.

“Cyclone Amphan which affected countries in the Bay of Bengal, including India, [in May] alone had an economic impact of $13 bn and displaced 4.9 mn people, accounting for the biggest displacement due to an extreme weather event anywhere in the world in 2020,” said the report.

It further said that the displacement due to the June-October floods in India was ranked second, impacting another 4 million people.

“It is clear that the impacts of cyclone Amphan and the floods in India cumulatively endangered the maximum number of lives and livelihoods than anywhere else in the world and their economic impacts were equally high,” it added.

Dr. Roxy Mathew Koll, a climate scientist at the Indian Institute of Tropical Meteorology in Pune, said: “2020 was exceptionally warm, as far as the Indian Ocean is concerned. We saw record temperatures in the Arabian Sea and Bay of Bengal, straddling between 30°C-33°C. These high temperatures had the characteristics of marine heat waves that might have led to the rapid intensification of the pre-monsoon cyclones Amphan and Nisarga. Amphan was one of the strongest cyclones ever recorded in the Bay of Bengal during the pre-monsoon season.”

There were nine extreme events, influenced by climate change, each of which caused $5 billion damage or more.A very intense Asian monsoon was behind five of the ten costliest events.

The US was hit by the highest costs due to the record hurricane season and fires.

Ten of the weather disasters listed by Christian Aid saw insured damages worth $150 billion, topping the figure for 2019 and reflecting a long-term impact of global warming.

Extreme weather disasters, of course, have plagued humanity long before manmade global warming began to mess with the planet’s climate system. But more than a century of temperature and precipitation data, along with decades of satellite data on hurricanes and sea level rise, have left no doubt that Earth’s warming surface temperature is amplifying their impact. 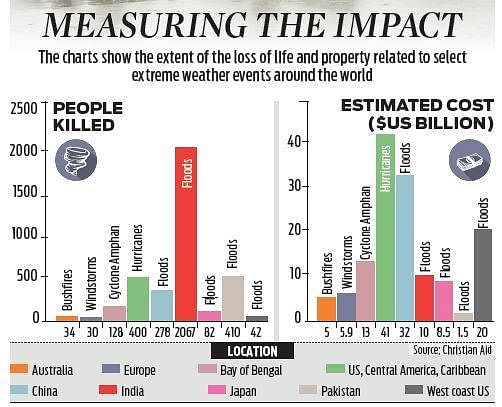