AAP has most candidates with criminal backgrounds: ADR report

At 10, the Congress has the least number of candidates with cases registered against them

AAP, which is contesting all 70 seats, tops the tally as 51% (36) of its nominees have criminal cases against their names.

The BJP ranks a distant second, with 17of its nominees facing criminal charges for various offenses. The saffron party is contesting 67 seats, leaving 3 for allies Janata Dal (United) and the Lok Janshakti Party. 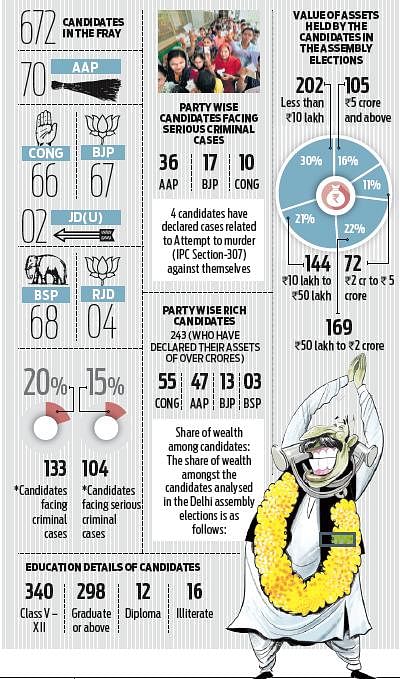 Congress fares the best in the tally, as only 10 of its candidates have criminal cases registered against them.

The compilation of criminal records and other details of the candidates are based on affidavits submitted by individuals along with their nomination papers, which was taken from the website of Election Commission of India.

According to the analysis done by ADR, 104 candidates have serious criminal offences against them and 32 are involved in crimes against women.

Four constestants are facing a case related to attempt to murder (IPC Section 307) and 20 have already been convicted for various crimes.

About 36 % (243) candidates are millionaires and the average assets per candidate Rs 4. 34 crore, up from Rs 3.32 crore in the previous elections.

AAP’s Mundka candidate Dharampal Lakra, with assets of Rs 292 crore, is the richest in the fray.

With total assets worth Rs 3,600, Rajesh Kumar of the Republican Party of India (Athawale) is the poorest candidate.

He is contesting the Palam seat. The report compiled by the ADR further says 16 candidates are Illiterate, while 37 have studied upto class 5.

Stay up to date on all the latest Nation news with The New Indian Express App. Download now
(Get the news that matters from New Indian Express on WhatsApp. Click this link and hit 'Click to Subscribe'. Follow the instructions after that.)
TAGS
aap AAP has most criminal candidates ADR AAP candidates Delhi elections Delhi polls Delhi Assembly elections