More than 10,000 police personnel will be deployed to ensure the security of US President Donald Trump and Prime Minister Narendra Modi’s 22-km roadshow in Ahmedabad on February 24.

MUMBAI: More than 10,000 police personnel will be deployed to ensure the security of US President Donald Trump and Prime Minister Narendra Modi’s 22-km roadshow in Ahmedabad on February 24.
Officials said 25 senior IPS officers would be in charge of  security during the roadshow and when the leaders visit Sabarmati Ashram before jointly inaugurating the 1.10 lakh-capacity Motera cricket stadium — the biggest in the world. 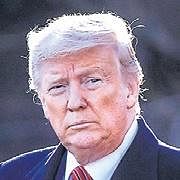 The security detail also include 65 assistant commissioners, 200 inspectors and 800 sub-inspectors — all manning strategic locations in the city, a senior police officer said.The massive deployment will be in addition to officials of the US Secret Service and officials of the National Security Guards (NSG) and the Special Protection Group (SPG), the officer added.President Trump, First Lady Melania Trump and PM Modi will travel the 22-km long route starting from the Ahmedabad International Airport to Sabarmati Ashram and then on to Motera stadium via the Indira Bridge, the officer said.

“An anti-sniper team of the NSG will also be stationed along the route. A bomb detection and disposal squad of police has already started scanning the entire route,” he added. Police is using specialised software to check hotels for information on occupants, especially foreign guests even as it is making background checks on the 1.25 lakh invitees who would fill the stadium.

Jaish releases video, threatens ‘revenge’
Srinagar: Ahead of US President Donald Trump’s India visit, terror outfit Jaish-e-Muhammad has released a video that calls for “revenge”. In the video, a person is seen threatening the Centre saying that “the way you harassed the Muslims and destroyed their settlements will be avenged... We’ve heard lullabies on peace... it’s time to see things unrestrained”. Meanwhile, security agencies have received an input that at a  recent meeting of terror groups in POK, where ISI and Pakistan Army officials were also present, it was decided that Hizbul Mujahideen should be activated and should take responsibilities of terror acts from LeT and JeM.

Uttarakhand troupe to regale visiting PREZ
Dehradun: An Uttarakhand dance troupe has been invited to regale President Trump with the ‘Ghasiyari’ dance form of Jaunsar area of Tehri district when he visits India next week. Nathilal Nautiyal, whose 8-member group will be presenting the dance, said, “We are rehearsing every day to attain perfection. I hope he likes our dance.” The Ghasiyari dance form is performed on joyous occasions like marriage and at festivals like Holi and Diwali. Dancers wearing the traditional ghagra and waist-coat, perform to the accompaniment of the drum, flute and the ranasingha – the huge S-shaped musical horn like instrument.

Stay up to date on all the latest Nation news with The New Indian Express App. Download now
TAGS
Trump Ahmedabad