the source added. India and the US have an unprecedented level of convergence, and the two leaders would exchange views on regional and global issues of shared interests.

NEW DELHI:  Bilateral issues will dominate the talks between Prime Minister Narendra Modi and US President Donald Trump on February 25, Foreign Secretary Harsh Vardhan Shringla said on Wednesday. Defence, security, counter-terrorism and trade are among the issues the two leaders will discuss, he added. While official sources did not specifically rule out Jammu and Kashmir being raised during the meeting, they said India does not expect it to be a major factor as the US State department said it was an issue that needs to be resolved bilaterally. “Changing laws is India’s internal matter. Our sense is that these issues are behind them (US),” said a source, adding there have been two trips by foreign envoys to the region to assess the ground situation. 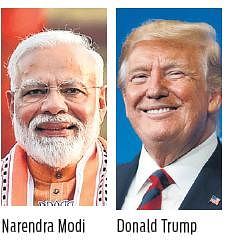 “We have also lifted most of the restrictions,” the source added. India and the US have an unprecedented level of convergence, and the two leaders would exchange views on regional and global issues of shared interests. Trump, who will visit India on February 24 and 25, will be accompanied by a high-level delegation, said Shringla. Modi will host a lunch for Trump, while President Ram Nath Kovind will host a banquet in honour of the visiting dignitary. On the proposed trade deal, sources said neither India nor the US is interested in rushing into finalising a deal as both sides want to take a call with a long-term perspective. Earlier in the day, Trump had told reporters in Washington that he was “saving the big deal” with India for later and that he wasn’t sure if it would be signed before the Presidential election in November, signalling that a bilateral trade pact may not materialise during his India visit. “We’re doing a very big trade deal with India. We’ll have it. I don’t know if it’ll be done before the election, but we’ll have a very big deal with India,” Trump said.

City of Taj all prepped to host Trump and Melania

AGRA is being feverishly spruced up to welcome US President Donald Trump and First Lady Melania Trump, who are visiting next Monday to see the Taj Mahal. A thick blanket of security has been laid around the ‘monument of love’ with the deployment of around 6,000 security personnel. “The security paraphernalia is all geared up. The roads approaching Taj have been cleared off. Verification process of residents of houses located on the proposed route of the Trump to Taj is already underway,” said Ajay Anand, ADG, Agra Zone.

Uttar Pradesh Chief Minister Yogi Adityanath had visited Agra to oversee the preparations immediately after the presentation of the state Budget on Monday. Prime Minister Narendra Modi had also reviewed the arrangements along with the CM through videoconferencing, last Saturday. On Monday, a team of US officials along with local administration officers had reviewed the security preparedness at the Taj Mahal. Artists have been engaged to decorate the walls around Taj Mahal with paintings, while machines have been engaged to clean up the roads leading to Taj and the Yamuna riverbed. Road dividers are being repainted. 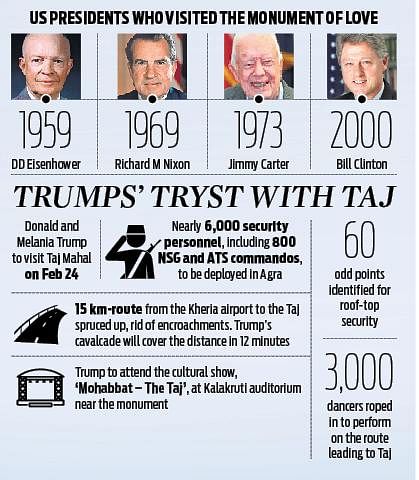 Stay up to date on all the latest Nation news with The New Indian Express App. Download now
TAGS
Trump Modi Namaste Trump