From Namaste Trump to Taj Mahal visit, here's a look at US Prez's jam-packed schedule

The US President will begin the nearly 36-hour-long trip with a visit to the Sabarmati Ashram in Ahmedabad at around 12:15 pm on Monday, 24th February.

NEW DELHI: United States President Donald Trump will arrive on his maiden two-day visit to India on Monday, becoming the seventh American President to visit the country. He has a jam-packed schedule for around 36 hours which he will spend in India.

Accompanied by First Lady Melania Trump, the US President will begin the nearly 36-hour-long trip with a visit to the Sabarmati Ashram in Ahmedabad at around 12:15 pm on Monday, the Ministry of External Affairs (MEA) announced on Sunday.

This will be followed by Trump's participation at the 'Namaste Trump' event at around 1:05 pm, where he will address a mammoth crowd of more than 100,000 people at the Motera Stadium in the city.

The event will be based on the lines of 'Howdy Modi' function that was addressed by the US President and Prime Minister Narendra Modi in Houston in September last year.

From Ahmedabad, the US President and the First Lady will make a brief stop at Agra where they will visit the Taj Mahal at around 5:15 pm, before departing for the national capital later in the day for the main leg of the 36-hour long trip.

On the morning of February 25, the US President will first receive a ceremonial welcome at the Rashtrapati Bhawan at 10 am as per the protocol. From there, he will go to the Rajghat to pay homage at the samadhi of Mahatma Gandhi. 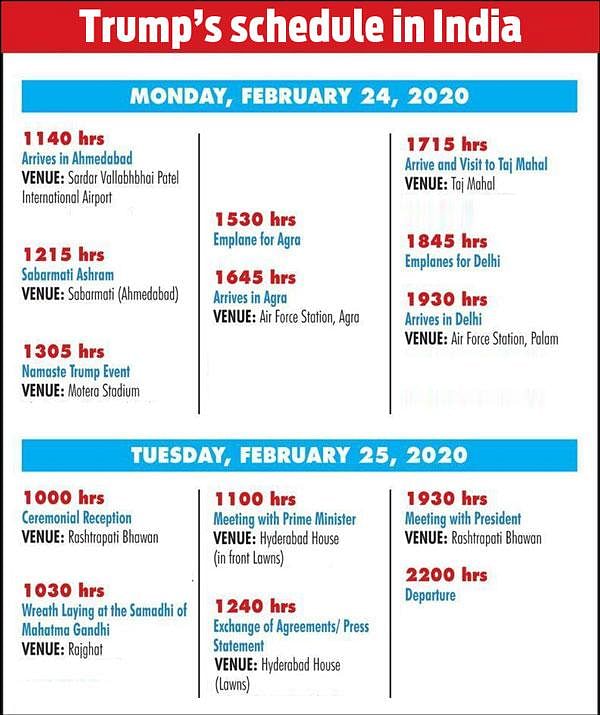 This will be followed by both, restricted, and delegation-level talks between Trump and Modi at the Hyderabad House in the national capital on Tuesday afternoon.

The talks would be followed by the exchange of agreements and Memoranda of Understanding (MoU) between the two countries.

Earlier this week, MEA spokesperson Raveesh Kumar had informed that New Delhi and Washington are eyeing around five MoUs in the areas of intellectual property, trade facilitation, and homeland security, among others.

"We are also looking at a joint statement which will basically capture the essence of the partnership between the two countries. I will not go into the details of the MoUs, I will see if I can, maybe, give you some topics on which MoUs are expected, we are looking at MoUs in the areas of intellectual property, for example, in the area of trade facilitation, in the area of homeland security. These are works in progress and we will have a much clearer picture closer to the date," Kumar had said.

Trump will meet President Ram Nath Kovind at the Rashtrapati Bhavan in the national capital at 7:30 pm before leaving for the United States by his special flight on the night of February 25.

Stay up to date on all the latest Nation news with The New Indian Express App. Download now
(Get the news that matters from New Indian Express on WhatsApp. Click this link and hit 'Click to Subscribe'. Follow the instructions after that.)
TAGS
Namaste Trump event Donald Trump India visit