Says constitutions meant not only to check people in power but help those deprived of it.

NEW DELHI: Chief Justice of India SA Bobde on Sunday advocated a “single system of laws”, calling it is the greatest need for environmental issues as they are not hindered by national and international borders.
Speaking at the valedictory session of the International Judges’ Conference on ‘Judiciary and the Changing World’ in the national capital on Sunday, the CJI also referred to the challenges faced by the judiciary, saying the constitutions are not meant “only to check people in power but also empower those who have been deprived of it”. 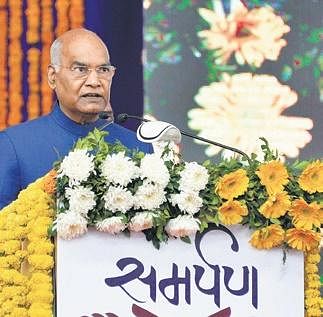 Referring to commonality of environmental issues, Justice Bobde said, “Environmental issues cannot be hindered by national and international borders. Water and wind flow seamlessly across the earth and even under it. The growth of vegetation affects animals and man, and a man affects both.”“Perhaps, there is the greatest need for a single system of laws in this regard. It is said that human beings are seeds as well as parasites to the earth. We take much more than we give back to the earth,” he said.The “commitment to dispensation of justice” is the common thread which binds judges across the world, he said, adding that the common challenge before the judiciary globally was to ensure “a gender-just world”.

Justice Bobde said that the “judiciary is the guardian of constitutional values and serves to counter-balance populist forces in a commitment to the rule of law”. The inherent role of the judiciary to take active measures to “women within the judicial fold”, he said, adding, “We have learnt from the illuminating session on the judiciary and gender justice that incremental measures are only the first step towards championing the cause of gender equality.”He said the Supreme Court has been providing copies of its judgments in nine vernacular languages, as desired by President Ram Nath Kovind. “We have more approximately 17,500 courts. In a country where over 22 languages and several thousand dialects are spoken, the Supreme Court has mandated the translation of its judgments into nine languages,” he said.

‘Expand legal cover to save privacy’
Privacy in the digital age faces challenges from hackers, private companies and government, and the judiciary has to deal with balancing the right to privacy with other rights and supplement existing legislative frameworks, senior Supreme Court Judge DY Chandrachud said during a panel discussion in the Capital on Sunday.

Now we are on Telegram too. Follow us for updates
TAGS
Bobde global green law