According to sources, Justice S Muralidhar's transfer was discussed within the collegium twice earlier but not ordered as several top court judges spoke against it.

The Centre on Wednesday night notified the transfer of Justice S Muralidhar from Delhi HC to Punjab and Haryana HC.

The notification of the transfer comes just hours after Justice S Muralidhar grilled the centre, the state government and the Delhi Police over the ongoing communal violence in parts of northeast Delhi over the Citizenship (Amendment) Act.

"In exercise of the power conferred by clause (1) of Article 222 of the Constitution of India, the President, after consulation with the Chief Justice of India, is pleased to transfer Shri Justice S Muralidhar, Judge of the Delhi High Court, as a Judge of the Punjab and Haryana High Court and to direct him to assume charge of his office in the Punjab and Haryana High Court," the government notification read. 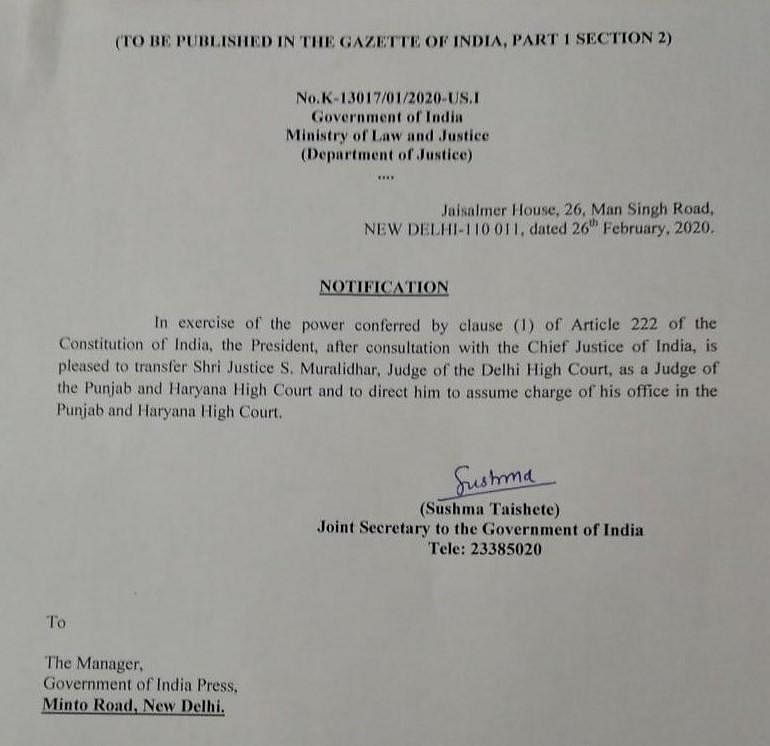 The Supreme Court collegium has recommended the transfer of three high court judges, including the third in seniority in the Delhi High Court, Justice S Muralidhar on 12th February.

Earlier, the proposed transfer of Justice Muralidhar to the Punjab and Haryana High Court drew strong reactions from the Delhi High Court Bar Association, which expressed shock and decided to abstain from work the very next day.

“Such transfers are not only detrimental to our noble institution but also tend to erode and dislodge the faith of the common litigant in the justice dispensation system,” a resolution adopted by the Bar body read.

The Delhi High Court Bar Association also requested for the revisit of the issue and to recall the move to transfer Muralidhar.

On Wednesday a division bench of Justice Muralidhar and Justice Talwant Singh, while hearing a plea seeking a judicial enquiry into the violence and registration of FIR against BJP leaders Kapil Mishra, Anurag Thakur and Pravesh Verma for allegedly making hate speeches, adjourned the matter till Thursday.

The bench on Wednesday afternoon also directed the Delhi Police to examine the videos related to hate speeches by political leaders, which allegedly led to violence in northeast Delhi, and take a decision in the matter.

The Bench had then directed the Delhi Police to ensure the safe passage of the injured victims by deploying all resources, as well as to make sure they receive immediate emergency treatment.

Justice Muralidhar is set to retire in 2023 and is known for his bold decisions.

He is also among the few judges who have done away with the convention of being addressed as ‘My Lord’ or ‘Your Lordship’.

According to sources, his transfer was discussed within the collegium twice earlier but not ordered as several top court judges spoke against it.

Congress leader Manish Tewari on Thursday said that the whole move was done for "opaque reasons".

"Judge Muralidhar was under transfer to Chandigarh for entirely opaque reasons but to abruptly ask him to leave the day after a midnight hearing at his residence in Delhi that must have saved many lives," he tweeted.

"Every lawyer and judge in India who believes law and justice are higher callings than just a career must strongly protest and condemn crude attempt to intimidate Judiciary by arbitrary transfer of Justice S Muralidhar in the middle of the Delhi riot hearings," Tewari said.

Congress General Secretary Priyanka Gandhi Vadra on Thursday tweeted that it is sad and shameful that the Centre is attempting to muzzle justice.

"The midnight transfer of Justice Muralidhar isn't shocking given the current dispensation, but it is certainly sad and shameful," Gandhi tweeted.

She also said, "Millions of Indians have faith in a resilient and upright judiciary, the government's attempts to muzzle justice and break their faith are deplorable."

(With inputs from ENS and Agencies)