The ground seems to be shifting from under the feet of established grassroots political parties in Kashmir with unending detentions of top leaders adding to their isolation.

SRINAGAR: The ground seems to be shifting from under the feet of established grassroots political parties in Kashmir with unending detentions of top leaders adding to their isolation.

In the political vacuum, left behind by the Peoples Democratic Party (PDP) and the National Conference, there is now a perceptible shift away to a nebulous group made up of deserters from mainline parties.

The gravitational shift has been visible post-August 5 following the scrapping of Article 370 and splitting of the state into two Union territories, followed by detentions of the big political guns, including three former chief ministers — Dr Farooq Abdullah, Mehbooba Mufti and Omar Abdullah under the Public Safety Act. 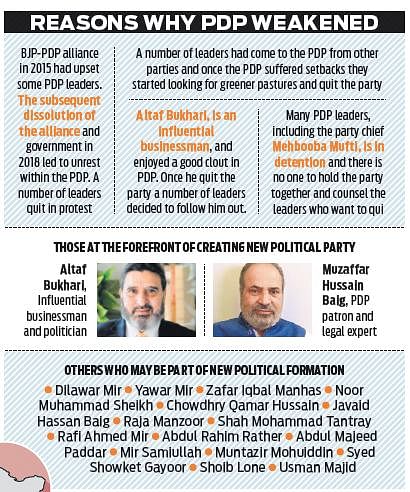 The forced abstentions have led to their parties — the PDP and NC —  being left ‘rudderless.’

Stepping into the gap are an influential businessman and politician Altaf Bukhari and PDP patron and legal expert Muzaffar Hussain Baig.

At the vanguard of the shift, both are ambitious characters who have sensed an opportunity to strike it big, with some tacit support from the BJP at the Centre.

The grapevine in the Valley is that Bukhari and Baig could join hands despite their reservations towards each other to form a new party.

Insiders said the PDP deserters believe that Mehbooba Mufti having lost her moral clout and her early release unlikely, Bukhari’s logic of “filling the vacuum and insisting on a dialogue for political concessions with BJP, is the surer way to break the logjam to achieve normalcy.”

The BJP-led UT administration has been approving of the development, even as the first families in the PDP and NC are likely to come under pressure via expected investigations into financial commitments during their respective administrations.

In the given political scenario of frustration, Bukhari’s line has received huge traction. Bukhari and Baig have had several meetings to iron out differences, which could lead to spelling out the contours of a future party with insiders hinting that Baig’s insistence on the top party post remains the glitch in a possible deal.

It is here, that BJP strategist Ram Madhav’s intervention is likely since Bukhari and Baig are believed to be close to him. Former minister Usman Majid sees the development as a ‘logical one’, given that the discourse has changed and the “PDP and NC are now irrelevant.”

He, however, discounted BJP influence on the emerging formation.