The use of unmanned aerial vehicles to aid farming is now a reality. Drones are now being used to spray pesticides and spreading seeds.

Drone for crop treatment
The use of unmanned aerial vehicles to aid farming is now a reality. Drones are now being used to spray pesticides and spreading seeds. A drone was the centre of attraction at the Rashtriya Krishi Mela in Raipur. Farmers were captivated when officials demonstrated the utility of drones in agriculture and horticulture. Spraying for stopping diseases and spread of weeds and pest control can replace labour intensive methods.

Krishi maha-kumbh in Raipur
A three-day National Agriculture Festival-2020 encouraged the agrarian community to experiment with non-conventional farm activities, adopt modern technologies and quality organic produce. “With various set of solutions for agriculture during the fest, the farmers were apprised on how they can effectively improve productivity with alternative options available to them and minimise their loss. And how integrated farming system can go along with modern efficient agriculture practices,” said Maninder Kaur Dwivedi, principal secretary (agriculture). Thousands of farmers updated themselves with modern agriculture information and technological tools that raise new hopes for farmland and sustainable farm produce. 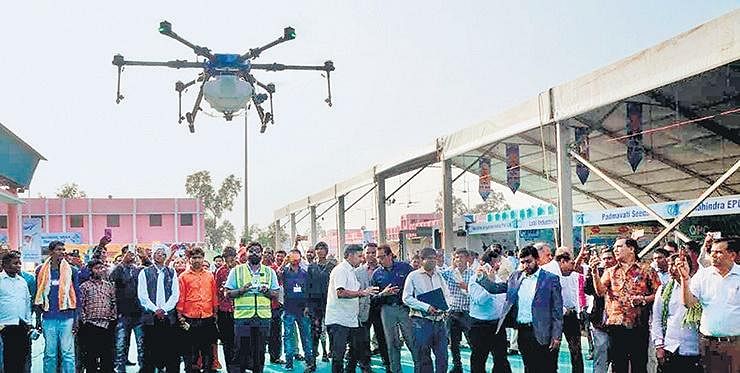 NMDC CMD gets leadership award
Mining giant NMDC’s chairman-cum-managing director N Baijendra Kumar, a 1985-batch IAS officer of Chhattisgarh cadre, was bestowed with the prestigious Business Leadership Award 2020 for promoting strong, viable and competitive corporations in the global economy. NMDC has recently accomplished the process of the extended lease of four mines at Dantewada in the state for next 20 years. “It’s an honour and we at NMDC strive to achieve more. Such award spurs me to set higher standards,” Kumar said. The awards given by Union minister Arjun Ram Meghwal.

Chhattisgarh to formulate tourism policy
Chhattisgarh will chalk out a new tourism policy during the cabinet meeting scheduled for February 29 which will be held at the prominent tourist spot Satrenga reservoir at Korba, 220 km north-east of Raipur. Chhattisgarh, which is in its 20th year of existence, has a high tourism potential with several iconic sites. However, the state has failed to tap the sector and it largely remains neglected. Chhattisgarh is now planning to revive tourism and will explore the possibility of setting up ‘homestays’ and improving connectivity.