Taking to Twitter, Priyanka Gandhi cited a media report that quoted a Banaras Hindu University student as saying that in the 365 days of 2019, Section 144 was imposed in Varanasi town for 359 days.

NEW DELHI: Congress leader Priyanka Gandhi Vadra on Thursday attacked Prime Minister Narendra Modi, saying he has the "gall" to tell people they have nothing to fear when Section 144 was imposed in his constituency of Varanasi on "359 out of 365 days".

The Code of Criminal Procedure (CrPC) section empowers an executive magistrate to prohibit an assembly of more than four persons in an area. 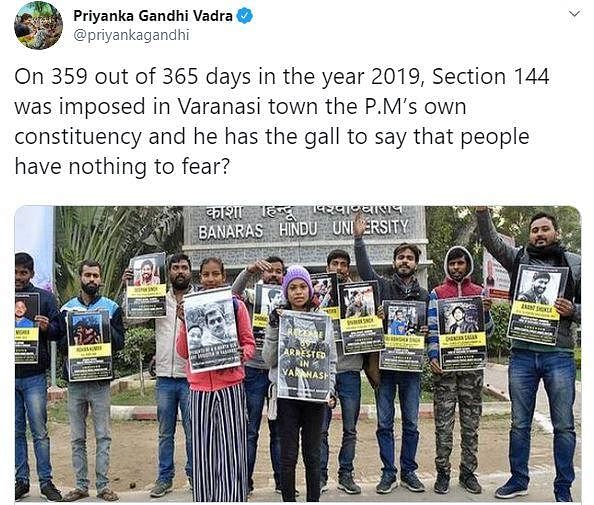 Taking to Twitter, Priyanka Gandhi cited a media report that quoted a Banaras Hindu University student as saying that in the 365 days of 2019, Section 144 was imposed in Varanasi town for 359 days.

"On 359 out of 365 days in the year 2019, Section 144 was imposed in Varanasi town the PM's own constituency and he has the gall to say that people have nothing to fear?" she said in her tweet.

Stay up to date on all the latest Nation news with The New Indian Express App. Download now
(Get the news that matters from New Indian Express on WhatsApp. Click this link and hit 'Click to Subscribe'. Follow the instructions after that.)
TAGS
Priyanka Gandhi Vadra Prime Minister Narendra Modi Section 144 Varanasi