The Sikkim HC will sit for 174 days and remain closed for 192 days, resulting in an average sitting per month of 15 days only.

NEW DELHI: Despite an ever-increasing backlog of cases across the country, the Supreme Court will sit for only 190 days in the entire year as per the 2020 calendar, whereas Bombay, Delhi, Gauhati and Manipur High Courts will have 210 working days.

The system of long vacations for courts — a British era practice — continues even after more than seven decades of Independence,.

The Sikkim HC will sit for 174 days and remain closed for 192 days, resulting in an average sitting per month of 15 days only.

As per the calendar, the number of non-sitting days, including Saturday and Sunday, come to 176 days for the apex court. It translates into an average sitting of 16 days per month. When there are nearly 60,000 cases pending in SC, it has five vacations in its annual calendar, including summer break of 45 days, one-week Holi vacation, and winter break of 15 days. It also closes for 10 days for Dussehra and Diwali.

Attempts to do away with court holidays in the past have not been well received by lawyers. Several former Chief Justices have floated the idea of a Supreme Court that works 365 days a year but lawyers didn’t agree to this. Though, several high courts have taken the initiative to work on Saturdays to dispose of cases pending for decades, but the number of days of vacation is still on a higher side.

But, legal experts defend the long vacation saying that judges end up doing a lot of work at home and in their chambers when they are not in the court rooms and for writing judgements, which cannot be written in open courts. 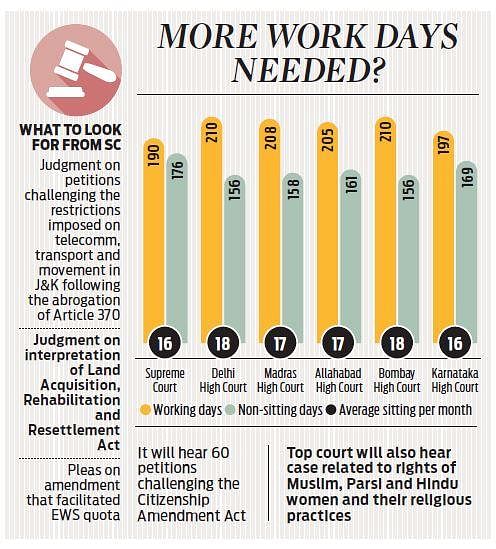 Stay up to date on all the latest Nation news with The New Indian Express App. Download now
(Get the news that matters from New Indian Express on WhatsApp. Click this link and hit 'Click to Subscribe'. Follow the instructions after that.)
TAGS
Supreme Court high courts