How dare she: Nirbhaya's mother lashes out at Indira Jaising for 'forgive convicts' remarks

Nirbhaya's mother Asha Devi said she couldn't believe 'how Indira Jaising even dared to suggest such a thing.'

Nirbhaya's mother Asha Devi has lashed out at senior advocate Indira Jaising for suggesting that she 'forgive' her daughter's rapists.

Asha Devi questioned Indira Jaising's suggestion to pardon the four men on death row who were convicted for the 2012 gang rape of her daughter and stated, "The whole country wants the convicts to be executed. Just because of people like her, justice is not done to rape victims."

Asha Devi on senior lawyer Indira Jaising's statement 'follow Sonia Gandhi's example and forgive convicts': Who is Indira Jaising to give me such a suggestion?Whole country wants the convicts to be executed. Just because of people like her, justice is not done with rape victims. pic.twitter.com/k3DfgRQio3

Nirbhaya's mother said she couldn't believe 'how Indira Jaising even dared to suggest such a thing.'

Asha Devi further added that she met Jaising many times over the years in the Supreme Court but 'not once she asked for my wellbeing and today she is speaking for convicts. Such people earn a livelihood by supporting rapists, hence rape incidents don't stop.'

On Friday, the advocate took to Twitter to make the request shortly after Asha Devi expressed her disappointment over the postponement of the execution dates of the four convicts from January 26 to February 1.

Nalini was arrested and convicted for her role in the assassination of  Rajiv Gandhi in 1991. 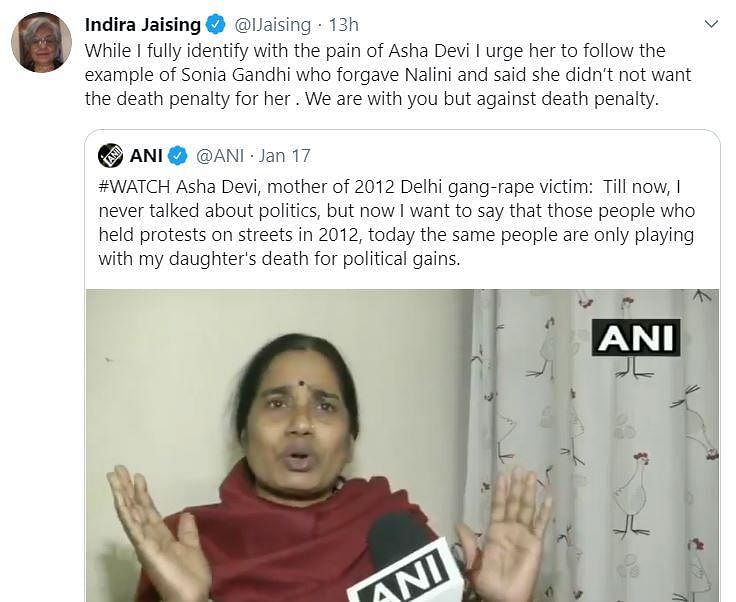 The death-row convicts are set to be hanged on February 1 at 6.00 am.

Four convicts, Vinay, Akshay, Pawan and Mukesh, were convicted and sentenced to death for raping Nirbhaya in a moving bus in New Delhi on the night of December 16-17, 2012.

The gruesome case brought the issue of women's safety and rape laws of the country to the forefront.

(With inputs from ANI)