Shirdi CEO Muglikar said the temple administration has not made any official statement on the "closure" of Shirdi planned by some individuals. 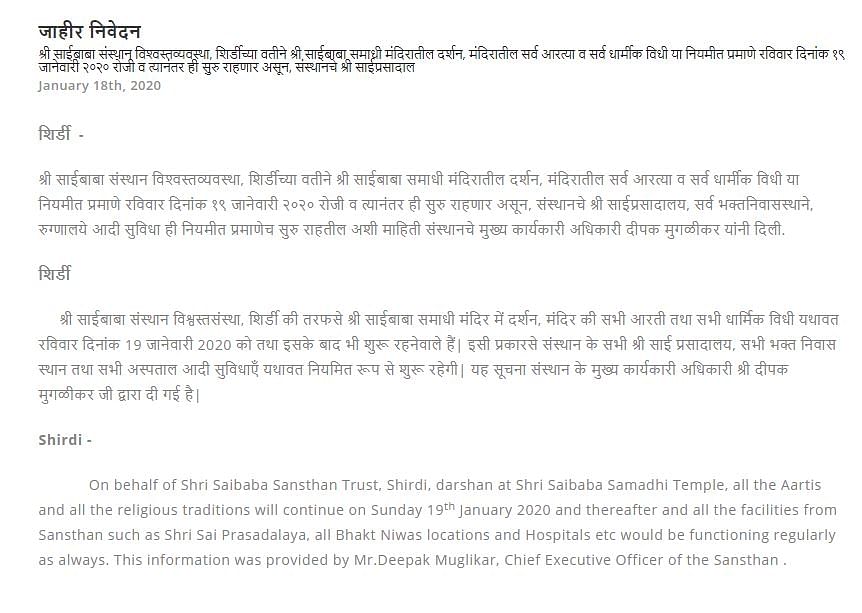 AHMEDNAGAR (Maharashtra): The world-famous Shirdi townfolk threatened a shutdown on Sunday after a controversy erupted over the purported birthplace of the revered saint, Shri Saibaba, 102 years after he took 'samadhi' here.

However, dismissing rumours, a top temple management official said the Shirdi Saibaba Temple will remain open and all facilities will continue as usual.

"The temple will open as usual, all 'pujas' and ceremonies will be performed, devotees will be free to take 'darshan' of Saibaba, the 'prasadalaya' will be offered and pilgrims' accommodation facilities, etc, will continue as normal," the Shri Saibaba Sansthan Trust (SSST) Shirdi CEO Deepak Muglikar told IANS.

The Shirdi town shutdown call was issued after Maharashtra Chief Ministre Uddhav Thackeray reportedly said that Pathri village in Parbhani was the birthplace of the 19th-century saint revered equally by people of all communities. He also announced a special grant of Rs 100 crore for the development Pathri to attract pilgrims and tourists there.

Muglikar said the temple administration has not made any official statement on the "closure" of Shirdi planned by some individuals.

About two dozen villages around Shirdi are expected to join the bandh, which may be extended till the government considers their demands, according to one of the organisers.

Thackeray's innocuous act of sanctioning Rs 100 crore to develop Pathri has created a political row with the Bharatiya Janata Party MP Sujay Vikhe-Patil threatening to wage a legal battle over the issue.

"There was no such dispute until now. Why has the claim that Pathri is Saibaba's birthplace come up only after the new government has taken over? The people of Shirdi may resort to legal action," warned Sujay Vikhe-Patil, in whose constituency Shirdi town is located.

On the other hand, senior NCP leader Durrani Abdullah Khan has dismissed the shutdown call saying "there is enough historical evidence" to prove that Saibaba birthplace was Pathri.

"Pathri is Saibaba's 'janmabhoomi' while Shirdi is his 'karmabhoomi.' Both the places have equal significance for all his devotees," Khan said.

He said the people of Shirdi are not concerned about the funds granted by the government, but only object to the reference of Pathri as Saibaba's place of birth.

"Some locals apprehend that if Pathri becomes popular and developed, then the flow of devotees to Shirdi could fall and affect the local economy," Khan told media in his hometown Pathri on Friday.

Pathri also has the 'Shri Sai Janmasthan Temple' which attracts a large number of devotees, and where Thackeray paid a visit this week.

Shirdi, in prosperous western Maharashtra, came on the airmap two years ago as part of the centenary celebrations of Saibaba's Samadhi in October 2018 and the year-long festivities saw the presence of President R.N. Kovind, Prime Minister Narendra Modi and over one crore devotees from around the world.

Adopting a stance of consensus, PWD Minister Ashok Chavan said Pathri should not be deprived of development and creating infrastructure facilities on account of the dispute over Saibaba's birthplace.

Meanwhile, representatives of the local villages will meet later this evening to chart out their course of action for tomorrow's proposed bandh and other issues.

The locals claim that during his lifetime and many years spent in Shirdi, Saibaba never mentioned his birthplace or his religion and that there were only certain unauthorised reports on it circulating for some time.