Most complaints to NCW came from Uttar Pradesh

The categories that saw the maximum number of complaints were right to live with dignity, dowry harassment or dowry deaths, police apathy against women, violence against women.

NEW DELHI: The state that hit the headlines last year for some of the most horrific incidents of crime against women also saw the highest number of women knocking at the door of the National Commission for Women. A whopping majority, nearly 60 per cent, of complaints which reached the NCW from aggrieved women were from Uttar Pradesh. The number of complaints from BJP-ruled states is even higher than last year; the Commission’s annual report 2018-19, which has just been compiled, shows.

Of the 19,279 complaints that the NCW registered in the last financial year, 11,287 were from UP alone. Last year, the total number of complaints from the state stood at 8,454 (55 per cent of the total complaints). The other states from where significant number of women approached the NCW included Delhi, Haryana, Rajasthan, Bihar and Punjab. 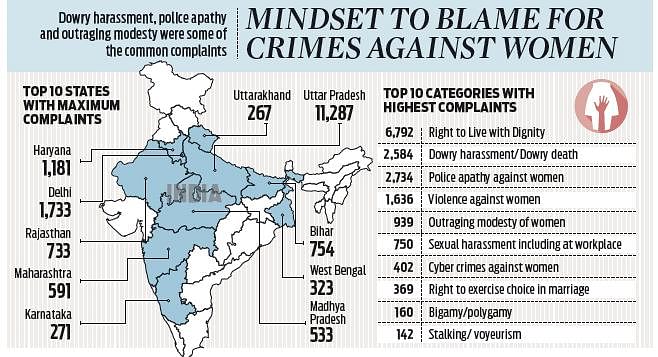 NCW chairperson Rekha Sharma told this newspaper that a large number of complaints coming from UP had been a trend for some time and added that it was the mindset of society that led to high rates of crimes against women.

“From our end, we take every case very seriously and push police and other authorities to follow them vigorously.” Another senior member said that NCW has been able to address a large number of such complaints. “Field visits and inquiries are also conducted by the Commission to investigate specific cases of discrimination and atrocities against women,” she said.

Stay up to date on all the latest Nation news with The New Indian Express App. Download now
(Get the news that matters from New Indian Express on WhatsApp. Click this link and hit 'Click to Subscribe'. Follow the instructions after that.)
TAGS
NCW Uttar Pradesh Crimes Against Women