Punjab Chief Minister Amarinder Singh has convened an all-party emergency meeting on Thursday to get to grips with the challenge.

CHANDIGARH:  There's bad news for Punjab. With 82% of the state’s land area witnessing a huge decline in underground water levels and 109 administrative blocks out of 138 placed in ‘over-exploited’ category, a severe water crisis looms in the ‘grain bowl of India.’

Punjab Chief Minister Amarinder Singh has convened an all-party emergency meeting on Thursday to get to grips with the challenge.

Experts from the Central Ground Water Board have pointed to the massive rate of fall in subsoil water by a whopping 51 cm per year.

Data compiled by the CGWB between 2006 and 2017 point to groundwater decline up to two meters in 55% of wells, between two to four meters in 21% wells and above four meters in 7% wells in Amritsar, Tarn Taran, Kapurthala, Jalandhar, Ludhiana, Moga, Mansa, Sangrur, Barnala, Fatehgarh Sahib and Patiala districts. 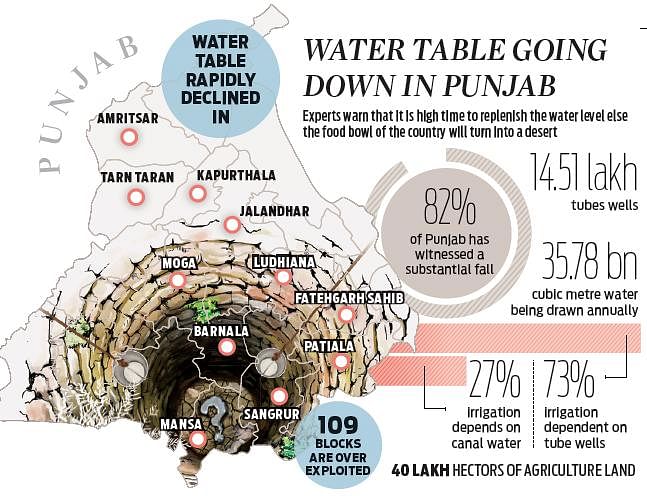 With successive Punjab governments liberally subsidizing power up to the present Rs 44,835 per tube well from a power subsidy budget of Rs 6,060 crore, groundwater extraction has gone unabated.

Power officials confirmed that over 1.83 lakh consumers have multiple agriculture power connections and that 73% of the 40 lakh hectare (ha.) sown, is through tubewells with the rest area dependant on canals.

Expert say the spread of water-intensive rice varieties over 31 ha has also resulted in water deficiency. Realising the crisis, rice acreage was even brought down to 29.20 lakh ha in 2019 but it hardly helped.

To add, wheat too is sown on 37 lakh ha with sugarcane occupying 1.5 lakh ha, cotton on 4 lakh ha, besides other crops.