Pakistan had recently said it would develop a second strike capability as well. It is yet to develop any missile with submarine launch capability.

NEW DELHI: Pakistan conducted a ‘training exercise test’ of its tactical nuclear missile on Thursday which experts says is a weak ‘symbolic’ response to India’s successful test of a Submarine Launched Ballistic Missile.

Pakistan’s Inter-Services Public Relations, the media wing of the army, called the test a ‘successful training launch of nuclear-capable surface-to-surface ballistic missile ‘Ghaznavi’, which can strike targets up to 290 km’.

Pakistan had recently said it would develop a second-strike capability as well. It is yet to develop any missile with submarine launch capability.

A Vinod Kumar said, “It is a symbolic response to India’s successful launch of the K4. Pakistan has couched it in the language of operational readiness exercise. Since they don’t have an SLBM for a matching response, they had to demonstrate what they have.”

Kumar is Research Fellow at the Institute for Defence Studies and Analyses.

India’s SLBM K-4 missile is designed for the Arihant class of nuclear submarines. India successfully test-fired the indigenous missile on Sunday from a submerged pontoon off the Visakhapatnam coast. 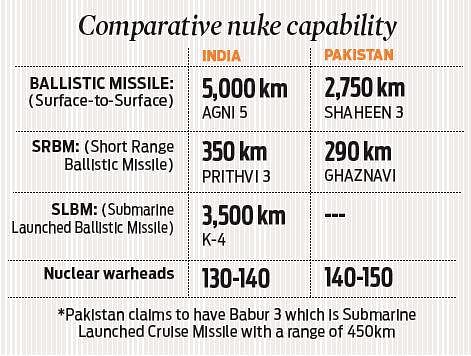 Stay up to date on all the latest Nation news with The New Indian Express App. Download now
TAGS
Ghaznavi nuclear missile K-4