Aishwarya Bhadradia flew all the way from Ahmedabad with her mother, a writer herself.

JAIPUR: THE much-awaited five-day long Jaipur Literature Festival began yesterday at the Diggi Palcae, in the heart of the of the state capital Jaipur. People from across the country and the word thronged the festival. 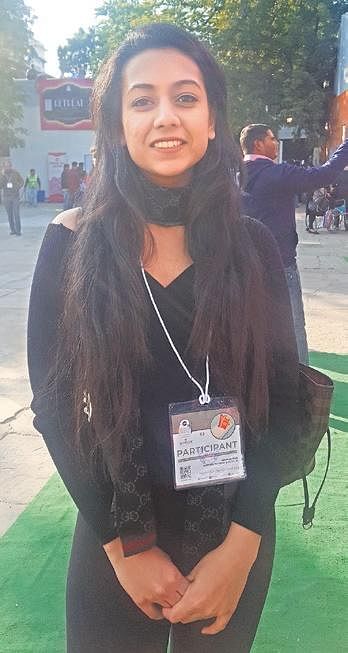 Vilas and Sulekha Agotikar, who’ve come from Pune, especially to attend the festival were caught hopping from one session to another. “This is our third time at the festival. Getting to meet and listen to so many people in a single space is an opportunity we don’t get back at home,” said the 71-year-old Vilas, who enjoys listening to authors and then read their books over the year.

For London-based Angela, this year marks her fourth visit to the festival. “Here, it is always interesting to hear people talk about various issues. I particularly enjoyed Lindsey Hilsum in conversation with Christina Lamb,” she said.

Aishwarya Bhadradia flew all the way from Ahmedabad with her mother, a writer herself. This is the first visit for the recent grad from Columbia University. “I’ve been able to understand the perspectives of different authors. Where else will you get to know about Burma or Brexit in such detail?”

Abhishek, a Jaipur resident, has been a regular for the past 13 years. The former journalist who is now pursuing his PhD, felt the festival has retained its soul, but is losing its charm to the crowds. “Initially, only around 25 people would attend a session. But now more than 100 do. Also, the sessions have increased, and it is a struggle to catch these on time. Yet, this remains an interesting event. I have lived in Delhi for many years but you won’t find William Dalrymple walking around and young artists painting in a corner.”

School students were also a part of the gathering. A group of 11th standard girls from Army Public School, Dhaula Kuan, was seen enjoying a talk by Sonali Bendre Bhel. One of them, Simran Chauhan, 16, added, “It’s really nice to be here, especially in this warm winter weather. We attended a couple of sessions and learnt a great deal.”