Trinamool says it’s not worried; while BJP is confident of swinging Hindu votes.

KOLKATA: The political landscape in West Bengal’s minority-dominated pockets looks set for a change with Asaduddin Owaisi’s All India Majlis-e-Ittehadul Muslimeen (AIMIM) gaining ground, signalling the advent of a new player in the already polarised arena where Mamata Banerjee’s Trinamool held sway over Muslim votes in the previous elections.

AIMIM has already secured more than three lakh memberships in the past five days, ringing alarm bells in the Trinamool. The outfit, an infant in Bengal politics, claimed to have opened party offices in all 21 districts, other than Purulia and Bankura, covering more than 250 Assembly segments out of 294.

AIMIM is using the CAA as a weapon against the ruling party citing the absence of its eight MPs on the day Lok Sabha voted and passed the CAB. ‘‘We have initiated an online membership drive and more than 3 lakh people responded. In most blocks of Bengal, our party’s presence is visible. We have opened our unit in Darjeeling recently. We have a strong presence in at least 55 Assembly constituencies in Murshidabad, Malda and North Dinajpur districts where Muslims are a majority,’’ said AIMIM’s Bengal in-charge Zameerul Hasan.

Analysts feel AIMIM’s entry could queer the pitch for Triamool by cutting into its Muslim vote-bank at a time when the party is hoping to get the minority community to vote en bloc for it by campaigning against CAA, NRC and NPR.

‘‘An AIMIM consolidation means a counter Hindu mobilisation which will help the BJP in Bengal. If there is a 2 to 3% swing in Muslim votes in AIMIM’s favour and a small chunk of Hindu voters shift their allegiance to the BJP, Bengal’s political picture may be different in 2021 polls,’’ said Dr Bishnupriya Roy Choudhury, a political science professor at Behala College.

Sensing an AIMIM onslaught, the Bengal CM had recently labelled it as an outfit founded by the BJP and asked the Muslims to be wary of the ‘‘minority extremism’’ from Hyderabad. ‘‘The people of Bengal have realised Mamata’s real face. Trinamool’s eight members were absent when the Lok Sabha voted and passed the CAB. It is clear who is BJP’s B team,’’ said Hasan.

The Trinamool leadership, however, is not ready to consider AIMIM as a threat. ‘‘People have realised the outfit has been planted in Bengal by the BJP. Bengal voters started rejecting the BJP and the recent bypoll results in three seats reflects it,’’ said secretary-general Partha Chatterjee.

Bengal BJP has decided to go with their nationalistic and anti-Muslim rhetoric by electing Dilip Ghosh, who courted controversy by making statements on CAA protesters, as the party’s Bengal president.

‘‘The Lok Sabha results showed the ruling party’s downfall has begun. We will overthrow the Trinamool-led government in 2021 even if there is no split in its minority vote bank,’’ said Ghosh. 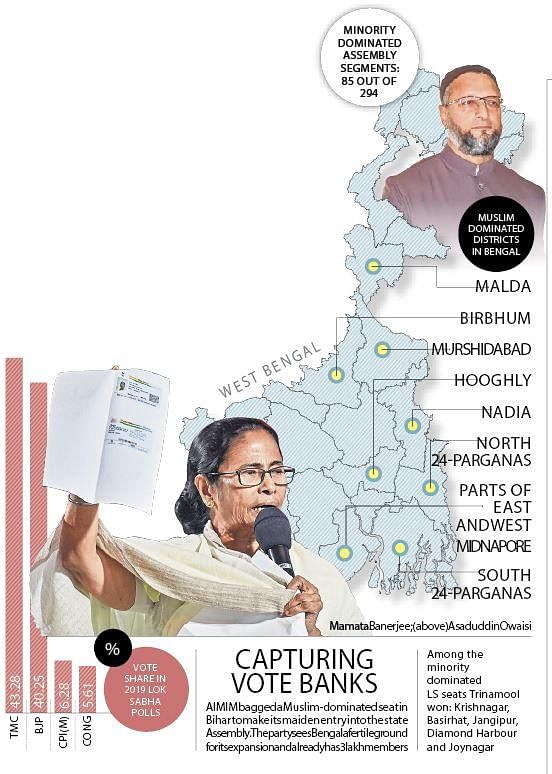 Now we are on Telegram too. Follow us for updates
TAGS
Asaduddin Owaisi AIMIM West Bengal politics