Moreover, every year celebrations are held on World Population Day and Vasectomy Fortnight to boost awareness across all states.

NEW DELHI: While Prime Minister Narendra Modi gave a call for population control during his Independence Day address last year, data shows a lax implementation of family planning schemes across India, as states spent just 55% of the funds approved by the Centre under that head. 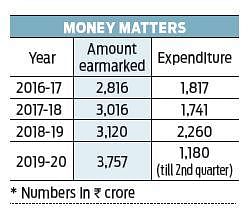 RSS chief Mohan Bhagwat, too, had recently expressed concern over the demographic skew, sought revision of the National Population Policy, 2000 and its uniform enforcement across the country.

Various types of spacing methods are offered to all beneficiaries irrespective of marital status in all districts across the country.

Yet, as per National Family Health Survey 4, the use of contraceptives in sexually active unmarried adolescents in India was just 16.4%.

Awareness programmes were also held like the first phase of the 360-degree media campaign launched in 2016 and the second phase comprising TV commercials, posters and hoardings, and a dedicated website on Family Planning was launched in 2017.

Moreover, every year celebrations are held on World Population Day and Vasectomy Fortnight to boost awareness across all states.