This is not the first time that France has backed India on an international forum.

NEW DELHI: Hours after around 600 of the 751 Members of European Parliament moved six resolutions against the Citizenship (Amendment) Act, France on Monday reiterated that the law was India’s internal political matter.

This is not the first time that France has backed India on an international forum.

Last week, the United Nations Security Council had met to discuss the Kashmir issue at the behest of China.

Before the meeting, France had said that the matter was India’s internal issue. The meeting had ended with China finding no support from other permanent UNSC members — the US, the UK, Russia — apart from France. 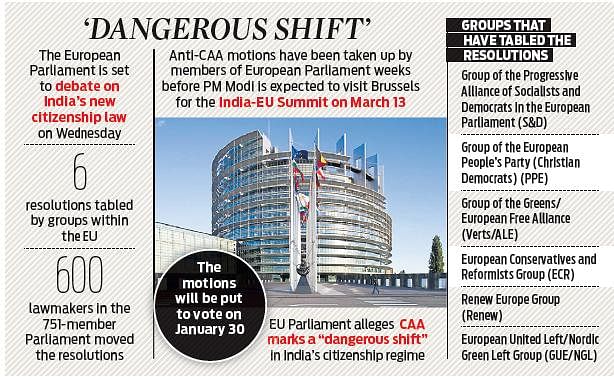 The resolution in the European Union Parliament stated that the enactment of the CAA marks a dangerous shift in India’s citizenship regime.

“The European Parliament is an institution independent of member states and the European Commission,” the source said.

Though there has been no official reaction from the Ministry of External Affairs on the resolutions, sources in the MEA asserted that the CAA was an internal matter and it was adopted after a thorough debate in both Houses of Parliament.

Later, vice-president M Venkaiah Naidu said there was no scope for outside interference in India’s internal matters. Naidu said he was concerned at the trend of foreign bodies interfering in matters that are “completely within the purview of Indian Parliament and government”.

“We are now more united than ever before and no one should have any concerns in this regard.

“We as a nation are committed to the cardinal principle of ensuring justice, liberty and equality for all of our citizens. While we are capable of addressing our internal matters as evidenced over the last 70 years, let others do so in their respective domains,” he said.