Madagascar has been hit by a Cyclone and there has been heavy flooding and landslides since last week causing loss of lives and displacement of a number of people.

NEW DELHI: Indian Navy on Tuesday launched Operation Vanilla in a bid to support the people of island nation Madagascar in the face of a natural disaster.

Indian Navy said, 'As the first respondent, Indian Navy Ship Airavat, which was en-route to Seychelles has been diverted to Madagascar for rendering assistance.'

The ship is carrying victualing, clothing and stores along with medicines. The ship is scheduled to reach Madagascar by 30 January 2020. As per the Navy 'The ship will be able to provide clothing, emergency food, medical assistance, diving and communication assistance and undertake transportation and evacuation of personnel using its four large and two medium-sized boats.' 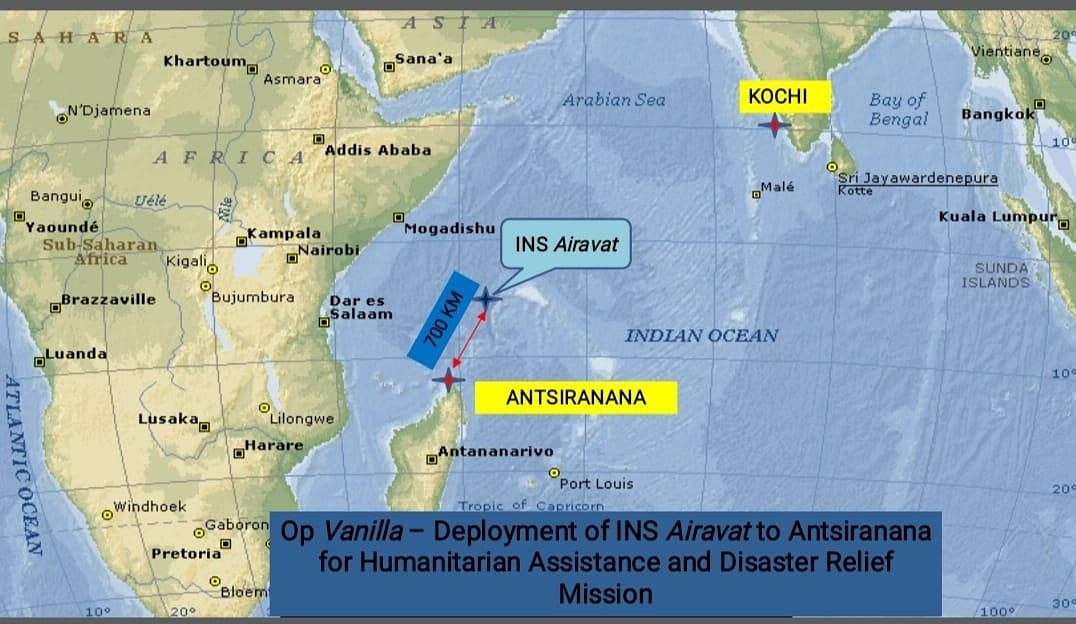 INS Airavat is an amphibious assault ship and its missions also include humanitarian assistance and disaster relief (HADR).

Madagascar has been hit by a Cyclone and there has been heavy flooding and landslides since last week causing loss of lives and displacement of a number of people.

India’s assistance to Madagascar is in consonance with Indian Navy’s Foreign Cooperation initiatives in line with Prime Minister's vision of 'Security and Growth for all in the Region (SAGAR)'.

Madagascar is also a member of inter-governmental organisation Indian Ocean Rim Association (IORA).
There are about 15,000 persons of India origin in Madagascar, including approximately 2500 Indian passport holders.

Now we are on Telegram too. Follow us for updates
TAGS
Operation Vanilla INS Airavat Indian Navy Madagascar