Cheetah to roar in India again

Reintroductions of large carnivores have increasingly been recognised as a strategy to conserve threatened species and restore ecosystem functions.

NEW DELHI:  The last cheetah in India was reportedly hunted in 1947 by Maharaja Ramanuj Pratap Singh Deo in Surguja, Madhya Pradesh (now in Chhattisgarh). The National Tiger Conservation Authority plans to reintroduce the animal in the same state where it was spotted the last.

The NTCA, organisation incharge for the project, has told the Supreme Court it will look at all the feasible sites but Nauradehi Wildlife Sanctuary near Sagar district in MP emerged as the frontrunner to host the cheetah. “Delighted that Supreme Court has just given OK to reintroducing cheetah from Namibia. This was something I had initiated 10 years ago. Cheetah which derives from the Sanskrit ‘chitra’ (speckled) is the only mammal hunted to extinction in modern India,” tweeted Congress leader Jairam Ramesh, who as environment ministers had conceptualised the idea.

The report stated: “Reintroductions of large carnivores have increasingly been recognised as a strategy to conserve threatened species and restore ecosystem functions. The cheetah is the only large carnivore that has been extirpated, mainly by over-hunting in India in historical times. India now has the economic ability to consider restoring its lost natural heritage for ethical as well as ecological reasons.”

Nauradehi was recommended as a potential site for reintroduction of cheetah as it has large grassland areas and good prey base. “The  current prey can sustain  about 25 cheetah and ifthe  700 sq km area of the sanctuary is made into an inviolate  core  area  as  proposed,  the  site can sustain a source population of about 50 cheetah,” said the report. The lack of basic amenities for local communities and their willingness to move out for better livelihood also contributed to Nauradehi’s shortlisting. 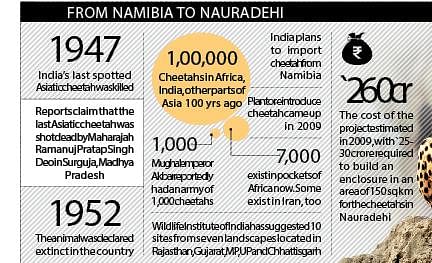