State Education Minister Varsha Gaikwad said that her government is the process of setting up a panel of experts and academics to examine the current syllabi and recommend changes.

MUMBAI: The ruling Maharashtra coalition has put together an expert committee to ‘de-saffronise’ the academic curriculum in primary and higher secondary schools.

Speaking to this newspaper, state Education Minister Varsha Gaikwad said that her government is the process of setting up a panel of experts and academics to examine the current syllabi and recommend changes.

“If the present curriculum is deemed radical, we will give it a secular makeover. We have been holding a series of meetings on it. All committees formed by the previous government will be disbanded and new ones will be set up,” Gaikwad said.

She said the curriculum should help the students acquire knowledge about Maratha icons like Chhatrapati Shivaji, Dr. Bhim Rao Ambedkar and Sambhaji.

“We are in the process of taking a series of decisions. They include making the reading of the Preamble mandatory during the assembly prayer in schools. It will help them understand the importance of the Constitution and its Preamble,” the Congress minister said. 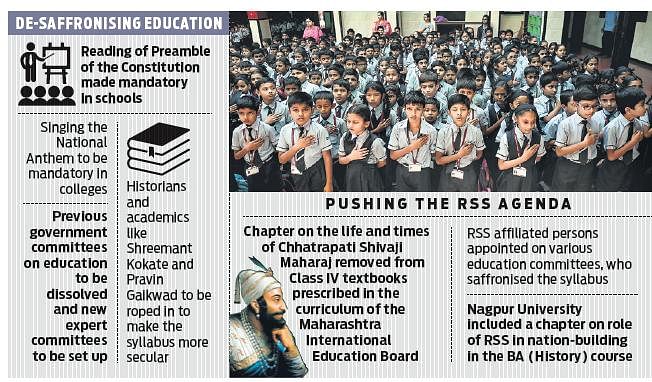 The state education department has decided to involve the likes of noted historians and academic experts Shreemant Kokate and Pravin Gaikwad in the process of revising the school curriculum.

They are believed to have given a saffron tint to the state’s school curriculum.

The Maha Vikas Aghadi has also decided to make the singing of the national anthem mandatory in all colleges of the state.

The decision, which came into effect on Thursday, the death anniversary of Mahatma Gandhi, makes it binding on the students to sing the national anthem before classes begin.

Uday Samant, the higher and technical education minister, confirmed that singing the national anthem will be a must in all colleges.

Even in the 1980s, singing of the national anthem was made compulsory in colleges. However, the practice was discontinued as the students didn’t take the rule seriously.