70 per cent of active COVID-19 cases by June-end were from just five states: Data

NEW DELHI:  The Covid-19 pandemic, while spreading across the country in June when Unlock 1.0 was rolled out, showed a pattern of concentrating in just a few states, an analysis of the June data by The New Indian Express has found.

On June 1, five states — Maharashtra, Tamil Nadu, Delhi, Telangana and Andhra Pradesh — together reported nearly 63% of the total active Covid-19 cases in the country. By the end of Unlock-1, the percentage had gone up to 70.

One pattern that emerges from the June data is that in all the five states, the number of active cases either doubled or went up by more than that.

While in Telangana and Andhra Pradesh it went up by seven times, in Tamil Nadu it was close to four times. (See graphic 1) Another pattern that emerges from the June data is that the number of daily confirmed cases rose sharply in the second half of the month.

It is not clear if this was the result of increased testing, as in the case of Delhi and Andhra Pradesh. But after June 8, Unlock 1.0 was further relaxed when places of worship, shopping malls, restaurants and hotels were reopened.

It started with close to 70,013 confirmed cases at the beginning of June and the tally of total cases by the month-end was 1,74,761.

In terms of total cases, the state recorded nearly 150% increase. Only two districts, Mumbai and Pune, reported over 62% of all cases in the state. 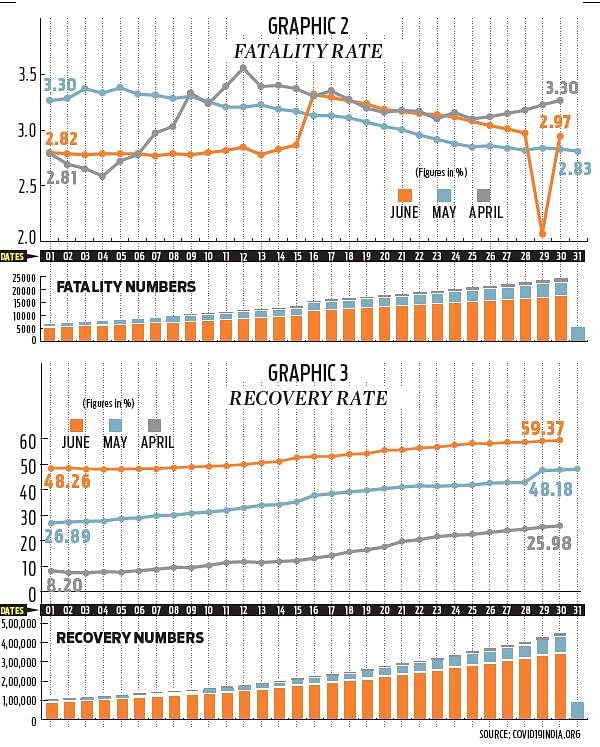 Second half of June saw surge in cases

The state registered 1,201 deaths by the month-end. The state capital Chennai reported more deaths, at 54%, than the rest of the state put together.

By June 1, Delhi had registered 20,834 confirmed cases and by the end of June, the national capital, like Tamil Nadu, had about four times as many cases, 87,360. The national capital stands at number 2 in the tally of states and UTs with maximum deaths due to Covid-19.

Timely intervention followed by ramped-up testing and extensive isolation strategy of containment zones seems to have worked around the middle of the month, when the growing graph of active cases was checked. On June 1, a total of 11,565 active cases were reported. This number increased to 27,741 on June 17, but has since shown a downward trend.

A look at the parameters such as total cases, active cases and fatality rate show a pre-June 18 and a post June 18 divide. While the number of overall cases was climbing in the state, after June 18 the state started seeing a new record every day, indicating the ‘Unlock’ effect given the incubation period of coronavirus infection is 14-28 days.

Covid-19 cases in the state are fairly well spread, from Anantapur in the west to East Godavari district in the east. Andhra Pradesh is also an example of a state which has seen a steady growth of infection throughout the state. The active cases were six times more on June 30 as compared to June 1.

Almost twice as many people died in June as compared to the preceding months. By the end of the month the state had carried out nearly 10 lakh tests, suggesting that it was trying to locate and isolate the hotspots, but a steady climb in active cases shows it was not very successful.

The number of fresh cases also followed the pattern of other four states. In the first 11 days of June, the state added roughly 100 new cases.

On June 12, daily cases crossed the 200 mark. After June 15 it breached 300, touching a high of 813 cases on June 28.June was also the month when the country did well in pushing up the recovery rate while curbing the fatality rate (See graphics 2 and 3).

At least nine states/union territories recorded a recovery rate above 70% during Unlock-1.0, with Chandigarh the best at 82.72%.

Stay up to date on all the latest Nation news with The New Indian Express App. Download now
TAGS
Coronavirus COVID-19 India Lockdown