The Congress trusts have been charged with violating provisions of the money laundering, income tax and foreign contribution Acts.

NEW DELHI:  The Congress and BJP were caught in a fresh exchange of heated words after the government on Wednesday announced an inter-ministerial panel to coordinate investigations into allegations against Rajiv Gandhi Foundation (RGF), Rajiv Gandhi Charitable Trust and Indira Gandhi Memorial Trust.

The Congress said the party would not be intimidated by the cowardly acts and blind witch-hunt by a panicked Modi government facing a barrage of questions on Chinese intrusion, COVID-19 mishandling and economic crisis.

The PM believes the world is like him and he thinks everyone has a price or can be intimidated, said Rahul Gandhi.

“He will never understand that those who fight for the truth have no price and cannot be intimidated.”

The Congress trusts have been charged with violating provisions of the money laundering, income tax and foreign contribution Acts. 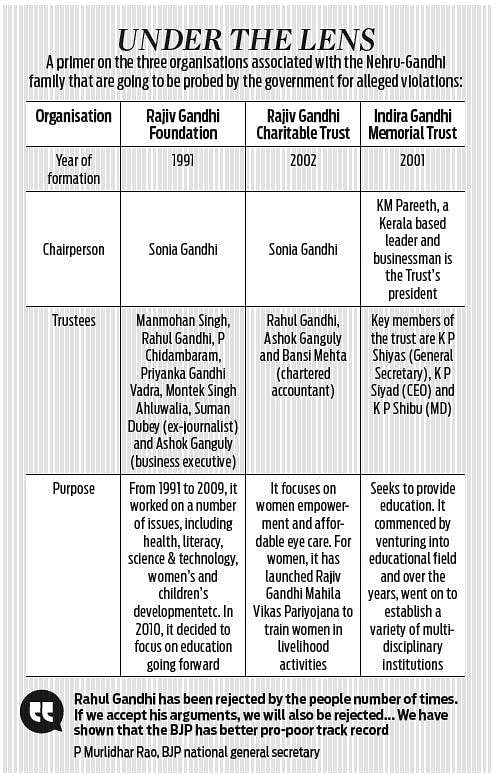 “The humanitarian work and distinguished service provided by these charitable organizations have always stood out and will withstand any vengeful and roving inquiry,” said party media in-charge Randeep Surjewala.

The BJP hit back at Rahul Gandhi with party’s national general secretary P Murlidhar Rao saying that he has been rejected by the people a number of times.

“If we accept his arguments, we will also be rejected.” He rejected the Rahul’s claims that the MSME sector has been badly hit in the recent months.

“We have shown the BJP has better pro-poor track record,” he said, adding 20 states/UTs have adopted ‘one nation, one ration card’.

He also lauded the Pradhan Mantri Garib Anna Yojna, which in eight months will cost over Rs 1.49 lakh crore, while providing 5 kg of foodgrain to each person, besides one kg of gram per family each month.

Rao also said the government is tracking the works done under the NREGS for which an additional Rs 40,000 crore has been provided under the Pradhan Mantri Garib Kalyan Yojna.