750 MW project has been developed on barren land in Rewa district, which was once used as a firing range

The 750-MW ultra mega solar power plant (comprising three solar power generating units of 250 MW each), which will reduce carbon emission equivalent to 15.7 lakh tonnes of CO2 annually (equal to planting 2.60 crore trees), has been developed on 1590 hectare barren land -- which for years was used as a firing range in Gurh area of Rewa district.

The project whose foundation stone was laid in December 2017 will render 24% of the renewable energy for running the Delhi Metro, while the remaining 76% solar power will be supplied to power distribution companies in the central Indian state itself. 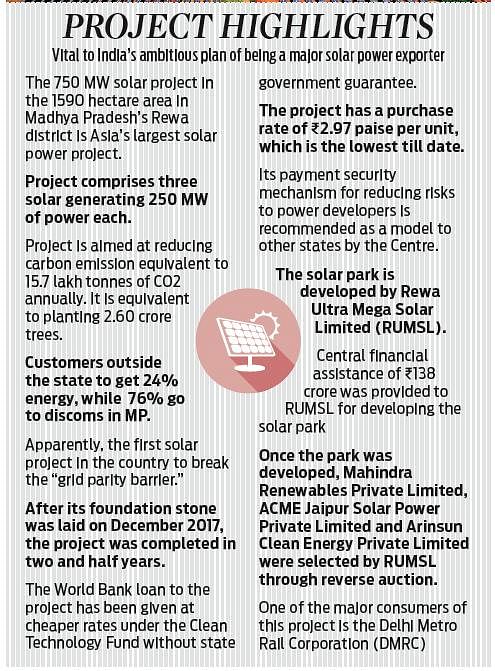 “Rewa has scripted history today. Over the times it has attained the signature identity of being named after river Narmada and also being famous for the White Tigers. But today history has been scripted by Rewa with the inauguration of Asia’s largest ultra mega solar power project. Now every person in Rewa can proudly say that they run the metro rail in national capital Delhi.

"Not only this, but Rewa must be congratulated for laying the foundation of a clean and secure world through this phenomenal effort of renewable energy,” PM Modi said while addressing the inaugural function via video conferencing.

“This project will transform the entire Rewa region into a big centre of renewable energy,” added Modi.

Terming solar power as one of the biggest mediums of fulfilling power needs in the 21st century, the PM said this sure, pure and secure medium of renewable energy, which is a must for electricity self-dependence – a prerequisite for attaining the larger vision of Atmanirbhar Bharat.

“At a time when policymakers globally are in dilemma whether to think about economy or environment, India has shown them that the economy and electricity are not opponents, but complementary to each other. In all government programmes, environment conservation and ease of living are being accorded top priority. Conserving environment for us isn’t confined just to few projects, but is actually a way of life.”

“In 2014, per unit solar power was priced at Rs 7-8, which has now come down to Rs 2.25 to Rs 2.50 per unit. The entire world is talking about how solar power is so cheap in India. Big efforts like what is being unveiled today have made India the most attractive market of clean energy globally. India is viewed as a global model, when there is discussion in the world about the transition towards renewable energy. Keeping this in mind, we’re engaged in connecting the entire world through International Solar Alliance (ISA) with the guiding spirit of One World, One Sun, and One Grid,” Modi maintained.

Glimpses from the solar power project that was inaugurated in Rewa, Madhya Pradesh, this morning. pic.twitter.com/uZOZ0YXxAQ

Addressing the occasion from Bhopal, Madhya Pradesh Chief Minister detailed about the efforts being made in the state to produce 10,000 MW solar power by 2022, including upcoming solar power projects in Neemuch, Agar, Shajapur, Morena and Chhatarpur districts, as well as a 600 MW floating solar power project on the Omkareshwar Dam built over Narmada river in Khandwa district.

The program was also attended via video conferencing, among others by MP’s Governor Anandiben Patel, Union minister of state for power, new and renewable energy RK Singh and union minister for petroleum and natural gas Dharmendra Pradhan.