Sources said the notices were sent after the chief whip of the Congress in Rajasthan Assembly, Mahesh Joshi, wrote to the Speaker, seeking proceedings against the rebel MLAs.

JAIPUR: Rajasthan Speaker has issued notices to Sachin Pilot and 18 other rebel Congress MLAs after the party sought their disqualification from the state assembly.

Sacked deputy chief minister Sachin Pilot and the other MLAs were asked to respond to the notices by Friday.

The notices were issued on Tuesday.

The MLAs had defied a whip and did not attend its legislature party meetings held on Monday and Tuesday.

Sources said the notices were sent after the chief whip of the Congress in Rajasthan Assembly, Mahesh Joshi, wrote to the Speaker, seeking proceedings against the rebel MLAs in accordance with the 10th Schedule of the Constitution.

The Congress also cited past Supreme Court rulings to seek their disqualification.

Among those sent notices are Vishvendra Singh and Ramesh Meena, who were sacked along with Pilot from the state cabinet after their rebellion against Chief Minister Ashok Gehlot.

Others include Deepender Singh Shekhawat, Bhanwar Lal Sharma and Harish Chandra Meena, who had given statements to the media challenging the Gehlot government.

The chief whip alleged in his complaint that the MLAs deliberately conspired against the Congress, acting openly against its interests.

They indulged in activities "blatantly prejudicial" to the continuation of the state government, the letter to the Speaker said.

Mahesh Joshi also wrote that the MLAs "deliberately absented" themselves from the meeting of the Congress Legislature Party held on Monday and, despite reminders, failed to attend the second meeting the next day. 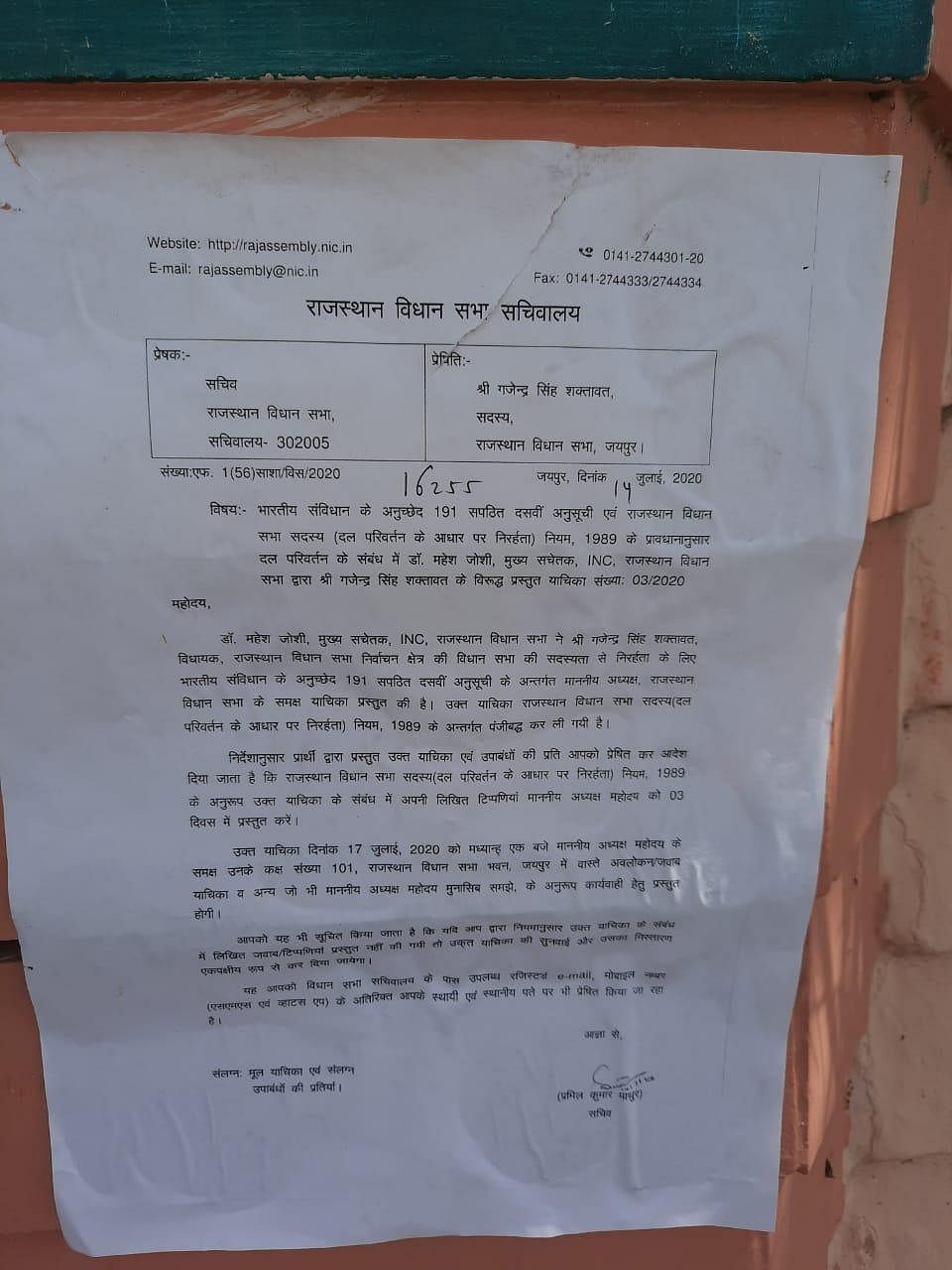 The rebel MLAs allegedly made statements to the media in an "openly hostile and prejudicial" manner against the interests of Congress and its government in Rajasthan.

Sachin Pilot was on Tuesday sacked as deputy chief minister and the state Congress president after he did not show up at the Congress Legislature Party meetings.

Two other ministers in the Pilot camp were also dropped from the Cabinet.

The Congress chief whip alleged that over the past several days attempts are being made to topple the state government through "corruption, bribery and other illegal means".

He also referred to a probe by the Special Operations Group (SOG) of the Rajasthan Police to investigate the "conspiracy".

The Congress has accused the opposition BJP of trying to lure its MLAs.

AICC general secretary Avinash Pande on Wednesday said it was up to the Speaker to decide what action to take if the replies to the notices were not satisfactory.

The party has also issued a gag order, saying no Congress member can communicate with the media without the permission of the newly appointed state unit chief.

On Tuesday, Pande, who is the Rajasthan in-charge at the AICC, dissolved the state executive and all cells of the Rajasthan Pradesh Congress Committee (RPCC).

The Congress appointed Govind Singh Dotasara as the president of the party's Rajasthan unit.

With the appointment of the new president, a new state executive and departments will be formed, Pande said.