Sub-text of Gehlot’s attack is he will be OK with rapprochement if Pilot stays off state.

JAIPUR/NEW DELHI: In his sharpest attack on ousted state Congress unit chief Sachin Pilot yet, Chief Minister Ashok Gehlot called him worthless and idle, who was out to topple his government.“I knew he was nikamma (worthless) and nakara (idle). He was just creating enmity among people,” Gehlot alleged, adding Pilot had been conspiring with the BJP since the last six months to unseat him. “ No one could believe he was capable of doing it. With an innocent face and good command over English and Hindi, he impressed the media. Though the people of Rajasthan knew the truth, we never questioned him, keeping party interest in mind,” Gehlot said. 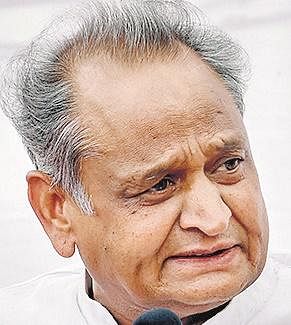 “Nobody believed me when I said there was a plot to topple the government. He (Pilot) even used to say he has not come here to sell vegetables, but to become the CM,” Gehlot went on.Gehlot’s vicious attack on Pilot is being seen as an attempt by him to send a message to the party high command to take the rebel leader out of Rajasthan if they want any rapprochement. Sources said Gehlot is aware that the leadership is still in touch with Pilot, much against his wishes. Indications are Gehlot would not mind if Pilot is accommodated in some party position in New Delhi. “The party high command is of the view that a lot has been invested in Pilot and he cannot be sacrificed because of a rift between two leaders. But Gehlot does not want any compromise on Rajasthan turf,” said a senior party leader.

There was further mudslinging as Congress MLA Giriraj Singh Malinga alleged he was offered `35 crore by Pilot to join the BJP. Malinga is amongst the six BSP MLAs who defected to the Congress last year. For his part, Pilot threatened to sue Malinga.In the Rajasthan High Court, hearing resumed on the rebels’ petition challenging the disqualification notices issued to 19 of them by Speaker C P Joshi last week. The court will continue its hearing on Tuesday and subsequently pronounce its order.

Worthless, idle slurs
“Rajasthan is the only state where no demand was raised to change the PCC president in seven years though we knew he is nikamma (worthless) and nakara (idle),” Gehlot said