Deepak Kasar, head of Malegaon Municipal Corporation, said the patient doubling ratio in the town has gone from two days in May to 123 days in July.

MUMBAI: Malegaon was once the hotspot of COVID-19 patients in Maharashtra. It is now turning out to be a model for others to follow because of Unani ‘kadha’ and unique administrative measures.

The minority-dominated and highly congested textile town in northern Maharashtra, 250 km from Mumbai, has so far recorded 1,266 corona patients and 86 deaths.

Deepak Kasar, head of Malegaon Municipal Corporation, said the patient doubling ratio in the town has gone from two days in May to 123 days in July.

“There were 16 deaths in April, 55 in May, 15 in June and nine in July. We have focused on immunity-boosting in various ways,” said Kasar. 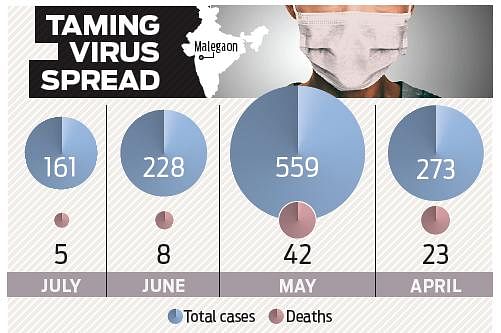 “Besides routine medicines, the patients were also given Unani or Ayurvedic extracts of various herbs. We gave them the confidence that they would be all right,” said Kasar, who too was infected.

“I started cycling for at least 20 km every day. Our guardian minister Dada Bhuse visited various parts of the city on cycle. Our confidence helped the people to drive away the fear about the infection. Besides, in the Covid centre, we applied some modification in our treatment.”

The patients admitted to the centre would start their day with ‘dancing yoga’ or any light physical exercise. “We also allowed them to play cricket and other outdoor games. Then, FM radio and TV sets were brought in…the patients were free to sing ‘bhajan’ and recite ‘shayari’ as well,” said Kasar.

He said initially, many people in residential colonies did not let in those who were working at the Covid centre for fear of getting infection.

“We made arrangements for these health workers and doctors in hotels and hostels and provided them all facilities. This way, the frontline warriors were fit to work for the people. Their tests were also carried out regularly and the reports were shown to the residents,” said Kasar.

The Unani Kadha which is supposed to have done wonders for Malegaon was prepared by local Dr Abulirfan Ansari, former principal of Mohammadiya Tibbiya College. He distributed it not only among the infected but also others.

Meanwhile, the state registered 9,895 new COVID-19 cases on Thursday, taking the state-wide tally to 3,47,502, while 298 more patients succumbed to the infection, 55 of them in Mumbai, the health department said.

With 298 deaths, the toll increased to 12,854, said a statement from the state health department.

With this, the total cases in the MMR, which consists of Mumbai city and parts of its adjoining districts, rose to 2,13,950, while the death toll shot up to 8649.

Among the worst-hit satellite cities in the MMR, Thane city saw its COVID-19 tally rising to 18,320, while Kalyan- Dombivli has recorded 19,880 cases so far.

The state's COVID-19 recovery rate is 55.9 per cent andthe fatality rate 3.7 per cent, the release said.

Currently, 8,74,267people are in home quarantine and 45,222 in institutional quarantine.