Bad loans could balloon to their highest in 2 decades, warns RBI

NEW DELHI:  The economic stress induced by Covid-19 could push gross bad loans to their highest in nearly two decades, the Financial Stability Report (FSR) for July by the Reserve Bank of India revealed on Friday.

Admitting that the loan moratorium scheme has suppressed the real stress on Indian banks, RBI governor Shaktikanta Das, warned banks to remain extremely watchful and focussed, in his foreword of the FSR report, which paints a very gloomy picture for the Indian banking sector, at least in the immediate future. 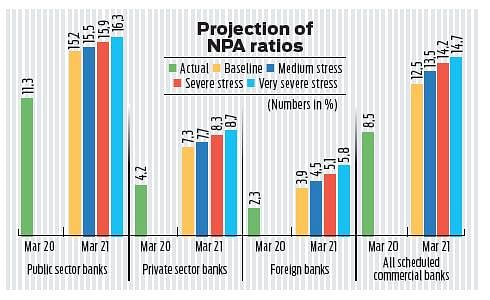 The last time it was as high was in March 2000, when the gross NPA ratio was reported at a whopping 12.7%. As expected, the report said public sector banks are likely to be the worst hit, which could see their gross NPAs rise to 15.2% by March 2021 from 11.3% a year earlier in the baseline scenario. The report warned that on account of the worsening macroeconomic factors, even private banks and foreign banks would see a spike in bad loans.

Sectors with the highest share of “good quality loans” that might get affected, include general purpose loans by non-banking finance companies, generation of electricity, NBFCs in the housing sector and development financial institutions. And with banks required to provide more against defaulters, the report warned of erosion of capital, saying systemlevel capital adequacy ratio could drop to 13.3% under the baseline scenario, and to 11.8% in very severe stress, by March 2021.

“Stress test results indicate that five banks may fail to meet the minimum capital level by March 2021 in a very severe stress scenario. This, however, does not take into account the mergers or any further recapitalisation, which will further increase systemic resilience,” the RBI said, without naming the five banks.

Stay up to date on all the latest Nation news with The New Indian Express App. Download now
TAGS
bad loans