Uttarakhand is yet to see a wave of peaks in Covid-19 cases, and it is scaling up health facilities to meet the challenges posed by the global pandemic.

Uttarakhand is yet to see a wave of peaks in Covid-19 cases, and it is scaling up health facilities to meet the challenges posed by the global pandemic. The state saw a sudden rise in coronavirus cases because of a few super-spreaders, said Chief Minister Trivendra Singh Rawat in conversation with Prabhu Chawla, Editorial Director, The New Indian Express, on TNIE’s Expressions, a series of live webcasts with people who matter. 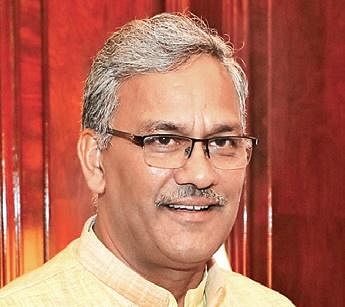 Uttarakhand is a Devbhoomi and a state with better environmental conditions. It’s a matter of concern that the pandemic has also reached the state. How are you responding?
The pandemic has to be responded in all seriousness and the state, right from the outset, has been on alert. There was a sudden burst in the Covid-19 cases. One of the employees in an industry here got infected while attending a wedding ceremony in another state. He infected more than 200 other employees. Since he was asymptomatic, the case could not be detected initially. Afterwards, more than 850 cases were detected with more testing. But two districts are still free of the virus, while the principal reason for its spread in the state has been the people who came from other states.

Is it true that the state has not ramped up its capacities, including beds, ventilators, as is being alleged by the Congress?
There are 32,587 beds ready in the state, while the total cases are 5,547, of which 3,430 have recovered. The active cases are 2,017 only. As many as 23,000 beds are lying unoccupied. There are 294 ICU beds and 249 ventilators.

Don’t you think the states are not paying attention to preventive steps including wearing masks?
It’s true that preventive steps should be strictly followed. That’s why we have made wearing face masks in public mandatory. The state has collected fines amounting to `8 crore. Those who hide the cases will invite the CrPC Section 370, and if there is a death because of cases being hidden, Section 302 would also be slapped.

Has coronavirus prevailed over the development agenda?
I admit that corona is the foremost challenge we are facing right now. We have already spent a little under `100 crore to fight it. The state has suffered a revenue loss of `4,000 crore. But the Centre and the 15th Finance Commission have suitably supported the state.

Do environmentalists raise concerns on infrastructure projects?
Uttarakhand has 71 per cent of its areas covered with forest, which is protected by the locals. Construction of roads is important, with the state having an international border.

There are concerns about holding Kumbh in the wake of the pandemic?
Kumbh is held as per the tradition, and the decision is taken by the Akhada Parishad. The saints say it should be held. But it needs to be seen depending on the Covid-19 situation.

Stay up to date on all the latest Nation news with The New Indian Express App. Download now
TAGS
Uttarakhand COVID 19 COVID Coronavirus