Unlock 1.0: States come out with guidelines

A day after the Centre announced Lockdown 5.0 till June 30 with three-phase easing of restrictions, states came out with their blueprints for relaxing the curbs.In Uttar Pradesh, restrictions in containment zones will continue till June 30, but curbs in other areas will be lifted with mask and social distancing being mandatory.

From June 8, supermarkets, shopping malls, hotels and restaurants will be allowed to open outside containment zones from 9 am to 9 pm, but large gatherings will be banned. A maximum of 30 people will be permitted at weddings and 20 at funerals.

Schools and colleges will remain closed till July 20. Metro rail services will also remain suspended. State transport buses, taxis and cabs can ply with limited number of passengers. Swimming pools, multiplexes and gymnasiums will remain shut but salons and beauty parlours can operate.

In offices, 100 per cent attendance of staff will be allowed but in three shifts. Consumption of liquor and tobacco in public will remain prohibited and spitting will be punishable with fine.In Maharashtra, which is the worst-hit state, the government under its ‘Mission Begins Again’ announced opening of market, industry and outdoor activities, but shopping malls and religious places will remain shut.

Government and private offices will function with minimum staff. Barber shops, salon and spa will remain shut but home delivery of liquor will continue.Outdoor activities like cycling, jogging etc. are permitted in open places between 5 am to 7 pm. But swimming pool, gym, cinema and sports complex will remain shut.

Intra-state travel will be allowed for emergency and essential services.  Private and government offices will function with 10  per cent and 15 per cent staffers from June 8. Construction and industrial activities will be allowed in all but contaminated areas.

In Rajasthan, the metro, educational institutions, malls and religious places will stay closed, but shops can open. Not more than 50 people can gather at wedding functions while up to 20 people can attend a funeral.

In West Bengal, after June 15, Red Zones will be divided in three categories—A, B and C. Industries, hotels, offices, salons, restaurants, shopping malls and construction work will be allowed to operate from June 8. Assam has not issued any fresh guidelines on relaxations. Chhattisgarh decided that all inter-state and intra-state travel restrictions would be relaxed. In Kashmir, the existing guidelines shall continue to remain in force till June 8. 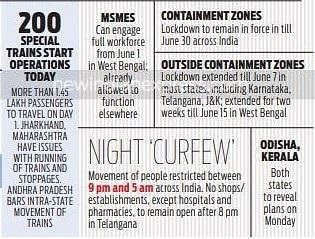 Punjab: Shops to open from today
The Punjab government ordered opening up of shops, including barber shops, beauty parlours, spas, between 7 am and 7 pm from Monday in the non-containment zones. Liquor vends can remain open from 8 am to 8 pm.

Stay up to date on all the latest Nation news with The New Indian Express App. Download now
TAGS
Unlock 1 Coronavirus