Seven states including Delhi, MP, WB, Rajasthan & UP account for 90% fatalities; all five southern states have less than 8% share in total count

NEW DELHI: Seven states — Maharashtra, Gujarat, Delhi, Madhya Pradesh, West Bengal, Rajasthan and Uttar Pradesh — account for over 90 per cent of India’s Covid-19 fatalities, an analysis of data on death toll has revealed. Of these, the first two states alone have reported over 60 per cent of the total deaths.In contrast, the five southern states — Tamil Nadu, Andhra Pradesh, Karnataka, Kerala and Telangana — have less than 8 per cent share in the total deaths.

Daily death count in the country has been above the 200-mark for last several days and the total tally has crossed 5,800.Maharashtra and Gujarat have reported 2,465 and 1,092 deaths, respectively, due to coronavirus infection. On an average, the daily death count in Maharashtra during last week was 70-80. However, Gujarat is now witnessing a flattening of curve of new cases.

Delhi, which is at the third position with 556 deaths, has witnessed a spike in daily fatalities in the last few days. The total number of deaths in the national capital on May 31 and June 1 were 57 and 50, respectively, doubling from 20-25 deaths till about a week ago.

Considering the sudden spike in the numbers, the Delhi government has reportedly asked district collectors to scout for additional land for creating cremation and burial grounds.

Among the southern states, Tamil Nadu has the highest number of Covid-19 cases and deaths. However, the state has one of the lowest mortality rates.

The total number of confirmed cases in Tamil Nadu stood around 24,500 on Tuesday afternoon. However, the state recorded 187 deaths, registering a mortality rate of 0.77. The death count on Wednesday had gone up to 197.

Moreover, the state has seen a sharp rise in confirmed cases in the last few days, with the daily count going up by over 1,000. Telangana, Andhra Pradesh, Karnataka and Kerala have relatively less deaths at 92, 64, 52 and 11, respective.

West Bengal and Madhya Pradesh have recorded 335 and 364 deaths so far. Past data disclosed that the two states have not recorded much movement in daily death count and have recorded 8-9 fatalities every day.

TN death rate low, Maharashtra struggling
On an average, the daily death count in Maharashtra during last week was 70-80. Tamil Nadu has the highest number of Covid-19 cases and deaths. However, the state with 24,500 confirmed cases has recorded only 187 deaths, registering one of the lowest mortality rates at 0.77 per cent. 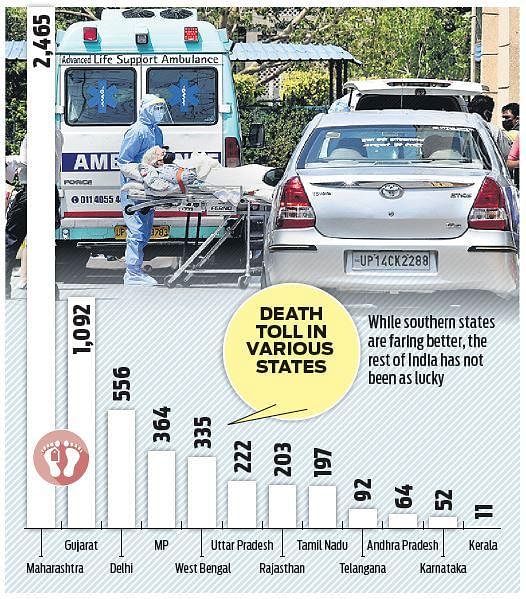