COVID-19 effect: Most schemes except 'Aatmnirbhar Bharat' package put on ice for 2020-21 fiscal to cut cost

While schemes announced in the budget and cleared by the Department of Expenditure will not be suspended, those at the stage of in-principle approval without fund release have been shelved.

NEW DELHI: With the economy staring at a recession, the Centre has sought to squeeze its expenditure by directing ministries not to initiate any new scheme for a year and put on ice various schemes already announced in the general budget. However, the Rs 20-lakh crore Aatmnirbhar Bharat package will continue unimpeded.

While schemes announced in the budget and cleared by the Department of Expenditure will not be suspended, those at the stage of in-principle approval without fund release have been shelved.

“No new proposal for a scheme/sub-scheme, whether under delegated powers to the administrative ministry including SFC (Standing Finance Committee) proposal, or through EFC (Expenditure Finance Committee), should be initiated this year except the proposals announced under the Pradhan Mantri Garib Kalyan Yojana or the Aatma Nirbhar Bharat Abhiyan package and any other special package/announcement,” said the Department of Expenditure (DoE) in an office memorandum dated June 4.Any exception would require the approval of the expenditure department.

According to sources in the ministry of finance, the directive was issued after it was flooded with requests for approval for funds.

“This does not mean all projects announced in the budget will be postponed. If the Department of Expenditure reviews it and clears it, it can still go. The purpose is to take up only that expenditure which is essential and of urgent nature,” a senior official in the finance ministry explained.

Regarding ongoing projects where funds have been released, their continuation “would be based on an outcome review based on evaluation”, the memo said.

The belt-tightening was expected as the government is sensing a steep fall in revenue. It has already decided to raise an additional Rs 4.2 lakh crore to take its borrowings to Rs 12 lakh crore in the current fiscal. 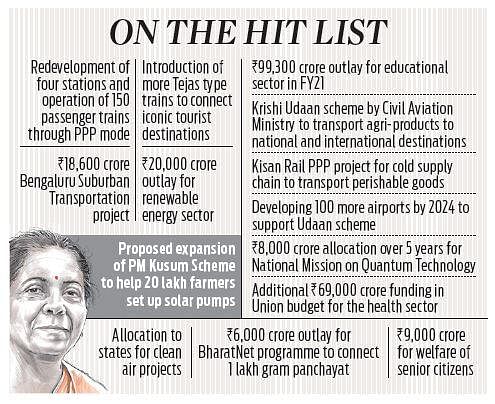