The ministry of environment, forest and climate change (MoEFCC) has already circulated a note to ministries informing about the proposed revision in forest classification.

NEW DELHI:  As of now, India’s pristine forests are protected and cannot be considered for any developmental projects. This may soon change as Union Environment Ministry is looking to do away with the “go” and “no-go” classification of forests and is coming up with new classifications.

The ministry of environment, forest and climate change (MoEFCC) has already circulated a note to ministries informing about the proposed revision in forest classification.

“There should be nothing called no-go areas. Big coal blocks and uranium mines are in pristine forests and you will have to mine them but we will allow limited access to high conversation areas (pristine forest). There will be stringent compliance measures on project proponents in high conservation areas compared to low conservation,” a top environment ministry official said.

At present, India’s forests are divided into go and no-go categories.

The no-go areas are pristine and biodiversity-rich forest areas where developmental projects are not given clearance. It is only in rare cases in which the MoEFCC allows such projects. 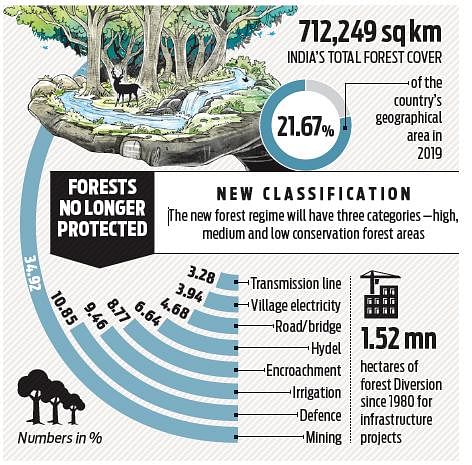 The Indian Council of Forestry Research and Education has been asked to map the three categories of forests based on satellite imagery.

“ICFRE will do actual classification. We will restrict projects in pristine forest but we have to look holistically and we can’t be headstrong. Any activity which can happen outside the forest easily, we must disallow that but we have made rules that are un-implementable and we need to make them user-friendly,” the official added.

The “go” and “no-go” areas with respect to coal mines in the dense forest were marked by the environment ministry way back in 2010.

It went through revision with forest areas restricted for projects cut down further after opposition from the coal ministry as it sought for opening entire forest for mining.

A high-level committee formed by the ministry to review India’s green laws in its report in 2014 had called for keeping certain biodiversity-rich dense forests out of bounds for any infrastructure and mining activity.

Stay up to date on all the latest Nation news with The New Indian Express App. Download now
TAGS
Forest Preservation