CHANDIGARH: Arms and ammunition from Punjab is being illegally sold in Delhi, Uttar Pradesh, Haryana and Rajasthan. The security hazard is, however, not one sided. Illegal arms are also being sold to criminals in Punjab from Uttar Pradesh, Bihar and Madhya Pradesh. The Punjab Police has now taken up the matter with the Ministry of Home Affairs (MHA).

Sources said the Organised Crime Control Unit of the Punjab Police arrested Amar Setia, a proprietor of Setia Gun House, last month. He is involved in the fake arms licence case being investigated by the CBI and has been sentenced to three years in jail.

Amar revealed that around two months ago he had sold 5,000 cartridges to a Delhi resident and in the last year he has allegedly sold around 20,000 cartridges illegally. He also revealed that other gun houses dealers were also selling ammunition illegally.Ammunition costs between Rs 60 and Rs250 a piece depending upon the calibre. “We are investigating the person Amar Setia sold the ammunition to. We have indentified the person and are now on his trail. It is suspected that ammunition might have landed in the wrong hands,” said a police officer. 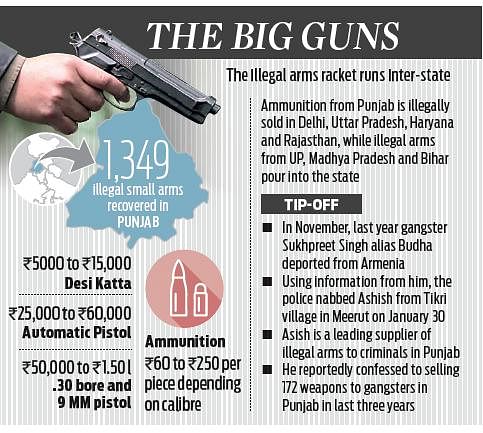 The officer said the ammunition is legally purchased from ordnance factories by the gun houses and at times they sell these by flouting norms and without issuing invoices. This is due to the lack of strict monitoring by districts authorities. According to norms, when ammunition is sold the invoice should contain details of the buyer such as name, address, arms licence number and the number and calibre of cartridges sold. The dealer is also supposed to entered details in his or her arms licence with date. The same details also have to be entered into a register which the gun houses have to maintain. When ammunition leaves the ordnance factory, details including the amount and calibre are shared with the district authorities.

In the last three years, 1,349 illegal weapons have been recovered by the Punjab Police which had been sold to gangsters. These weapons are manufactured in Shamli in Meerut and Saharanpur in Uttar Pradesh, Munger in Bihar and in the jungles of Malwa-Nimar region of Madhya Pradesh, said sources.Sources said Punjab DGP Dinkar Gupta has taken up the matter with the MHA and suggested that a special cell be created in CBI or NIA to monitor the racket. An officer on the condition of anonymity said,  “From desi kata (single barrel single shot gun), pistols, .30 bore and 9MM pistols are manufactured and sold from Rs5,000 to Rs1.50 lakh per piece.’’

In November last year, gangster Sukhpreet Singh was deported from Armenia. Using his leads the police, and the UP ATS arrested Ashish from Meerut on January 30. Ashish was supplying illegal weapons to criminals in the state. During questioning, Ashish reportedly confessed that he has sold 172 weapons to gangsters in Punjab in last three years.

Now we are on Telegram too. Follow us for updates
TAGS
Illegal arms Punjab Punjab crime Illegal arms racket

Prince Philip transferred to another London hospital for infection treatment

'Are you willing to marry her': SC asks man accused of raping girl; grants him protection from arrest