Changes in habits can contain coronavirus

At a time when a large number of Indians are worrying about a probable outbreak of a coronavirus epidemic,

NEW DELHI: At a time when a large number of Indians are worrying about a probable outbreak of a coronavirus epidemic, a new study has suggested that the best way to mitigate the epidemic is not through travel restrictions, but through early detection, public health interventions and behavioural changes. The study by US, Italy and China researchers observed that the travel ban imposed on Wuhan on January 23, the epicentre of the outbreak that spread globally, at best had averted the spread in mainland China by 3-5 days and internationally by a few weeks.

The study noted that by early February, airlines had begun restricting international flights to and from China; but computer modelling of the real-world spread of the virus suggests that “a large number” of infected individuals travelled internationally without being detected. Those individuals triggered fresh outbreaks elsewhere 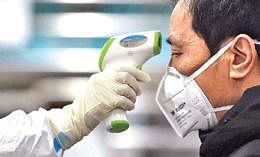 “This finding is consistent with the emergence of COVID-19 outbreaks in countries across the world, including Italy, Republic of South Korea and Iran in the second half of February,” the team of 17 researchers noted in the paper, “The effect of travel restrictions on the spread of the 2019 novel coronavirus (COVID-19) outbreak” that has just been published in the journal Science. The study has also put a question mark on measures like thermal screening at the airports as the virus has a long incubation period of 2-14 days and even more in some cases. “We were not able to find reliable data sources on the effectiveness of containment measures in place in Mainland China before January 23” it said.Researchers also cautioned that their findings were based on preliminary parameters relating to the incubation time for the virus, and prior knowledge about coronavirus epidemics.

PUNJAB
Two men hailing from Hoshiarpur, who returned from virus hotspot Italy, where nearly 10 people have died, have tested positive in the preliminary test. But final report from National Institute of Virology (NIV) in Pune awaited. The two are admitted to the isolation ward of Guru Nanak Dev Hospital in Amritsar

J&K
Two suspected coronavirus patients with “high viral-load” kept in isolation at the Government Medical College, Jammu. The two patients with a travel history to Italy and South Korea had fled the hospital’s isolation ward on Wednesday shortly after their admission, but were brought back within hours. Their samples were sent to the National Institute of Virology in Pune

108 swab samples of Indians in Iran arrived on a Mahan Air flight from Tehran. The samples are being tested at the laboratory in AIIMS, the health ministry said

7 Kuwait on Saturday suspended operations of all flights to and from India and six other countries — Bangladesh, the Philippines, India, Sri Lanka, Syria, Lebanon and Egypt — for a week

52 laboratories made functional for testing samples

Several states,, including UP and J&K, have announced suspension of all biometric attendance

Kashmir on Saturday ordered closure of all primary schools from March 9 in four districts, including Srinagar, in the valley until further orders

Srinagar Mayor Junaid Mattu has called for cancellation of Khelo India’s first winter games chapter, which starts in Jammu and the ski resort of Gulmarg in Kashmir Valley

Now we are on Telegram too. Follow us for updates
TAGS
COVID Coronavirus Prevention