A project to recycle waste water and direct it to villages with falling water tables has turned farmers towards prosperity, writes Harpreet Bajwa

PUNJAB: Often, government schemes to help people go awry. But in four villages near Phagwara, around 1,050 acres of land involving 260 farmers which had gone to seed has come alive after a project to treat sewage water for irrigation purposes proved a roaring success. A Sewerage Treatment Plant (STP) at Phagwara connected with a 12-km underground pipeline network has reduced dependence of farmers on overexploited underground water and is now saving thousands of families from going to ruin.

Dharminder Sharma, Chief Conservator of Soil, Punjab, said the idea was to save run off of water — even sewage — and put it to use. The project, completed in 2017 and linked to the water-scarce villages through an ambitious 12-km underground tunnelling has turned wastewater into veritable nectar, reaching and reviving some 1,050 acres.   “The project has vastly reduced dependence on groundwater besides the fact that treated water from STP is available round the year irrespective of climatic variability,” he said. 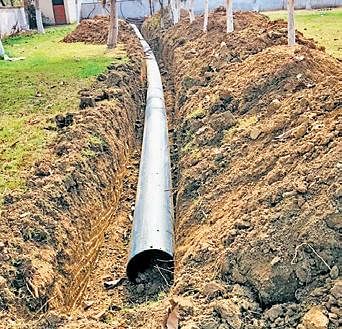 Farmers agree that many of them had no tubewells and were dependent on others for irrigation water. The installation of the underground pipeline has helped them shed dependency and brought additional wasteland under agriculture. There is huge savings on labour costs too. The scheme has now been expanded to benefit around 60,000 hectares through STP’s and today similar irrigation infrastructure has been created at 40 locations to treat 280 MLD to irrigate 8,500 hectares. The state government is now willing to transplant the model to cover 25 towns.

Viswajeet Khanna, Additional Chief Secretary (Development), Punjab said, “Water is becoming scarcer by the day-fresh water is even scarcer. Therefore, as a pioneering state for such projects, we decided to use and re-use water in a responsible and efficient manner. This particular project is one of our many where we are successfully using treated water from an STP for irrigation purposes, thereby saving freshwater for potable use.’’So successful has been this project that Punjab was recently awarded under the category ‘Promotion of citizen and state action for water conservation, augmentation and preservation’— one of the eight missions under National Action Plan on Climate Change — by the National Water Mission (NWM).
The success, however, lay incorrectly identifying heavy water exploitation regions in Plahi, Khangura, Kishanpur and Burna villages where exploitation of underground water was found to be 249%.

Satman Singh, 55, of Plahi village is happy that the irrigation system has given farmers an advantage that they can now save on fertilisers and freshwater. “Earlier, we use to use nine bags of fertilizers-DAP, sulphur, urea and potassium. Now, we just have put half a bag of urea and nothing else. We save up to Rs 5,000 per acre on input cost,” he said, adding, “Use of freshwater has also decreased.” Farmers say, before this irrigation system, farmers had to water his fields for five months for paddy. Now three-month irrigation is enough which saves another Rs 4,000 per acre on diesel.”

Sham Lal, 46, said, “We are saving not only on fertilizers and freshwater but also time. Earlier we used to get up in the middle of the night when power was available to switch on motors for irrigation. It took 5-6 hours, depending on water pressure. With water in canals, employees switch on for an hour or so during day time over Rs 10,000 per acre on diesel and other inputs is saved.” The huge expense every three years to dig deeper pauperised farmers who fell into a vicious debt trap. Several other sold off their fields and became unemployed. Now with treated water coming to their aid, fields in the worst crisis-hit villages of Punjab have got their colour back — thanks to a government initiative which no one thought would ever succeed.

Now we are on Telegram too. Follow us for updates
TAGS
sewage water for irrigation