58 Indians brought back from virus-stricken Iran in IAF plane

They have been quarantined in a medical facility in Hindon; foreign minister says govt working on bringing more Indians from the West Asian country

About 2,000 Indians are living in Iran, a country that has witnessed increasing numbers of coronavirus cases in the last few days.The official said the Indian citizens who have returned from Iran have been quarantined at a medical facility in Hindon.

“The IAF has activated necessary medical protocols and has put required facilities in place to provide fellow citizens with adequate care and support,” Banerjee said. Soon after the C-17 Globemaster arrived at Hindon airbase, External Affairs Minister S Jaishankar tweeted, “The IAF aircraft has landed. Mission completed. On to the next.”

The external affairs minister said the government was working on bringing back more Indians from Iran. Iran is one of the few countries which are reporting sizeable number of coronavirus cases. As per reports, over 237 people died of coronavirus in Iran while number of positive cases crossed 7000 mark. 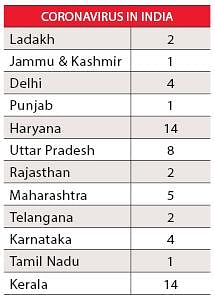 A video of Union Minister Ramdas  Athawale, Chinese Consul General in Mumbai Tang Guocai and Buddhist monks chanting ‘Go corona, go corona’ at a prayer meet has gone viral online. According to reports, the video was shot at Gateway of India on February 20 during a prayer session to stop the spread of the coronavirus in China. The novel coronavirus, which was first detected in China’s Wuhan city in December, has since spread to several countries, including India, and killed more than 4,000 people and shaved off several billion dollars from the world economy.