MUMBAI/NEW DELHI: India on Tuesday ramped up its response after a third coronavirus fatality was reported in Mumbai, with a 63-year-old who had been to Dubai recently passing away. His wife, too, had tested positive but is stable. The man first went to a private hospital but did not disclose his travel history. He was subsequently referred to Mumbai’s Kasturba Hospital, where he died.

A day after banning entry of passengers from the EU, Turkey and the UK, the Centre on Tuesday added Afghanistan, the Philippines and Malaysia to that list. But with reports emerging of at least 300 Indians being stranded at Kuala Lumpur airport, India approved AirAsia flights from the Malaysian capital to Delhi and Vizag.  In another initiative, the Centre deputed 30 officers in the rank of joint secretary and above to help states deal with the situation. Also, the aviation regulator asked all airlines to disinfect their planes every 24 hours.

Amid lockdowns at various levels across the country, Prime Minister Narendra Modi was emphatic that the ongoing Budget Session of Parliament will not be curtailed. Parliamentarians should be seen working at a time when India is grappling with the pandemic, he told BJP MPs. Maharashtra stayed on top of the infection list in the country with 36 Indians and three foreign nationals testing positive for the virus. An apparently upset Chief Minister Uddhav Thackeray warned that he would be forced to stop bus and train services across Mumbai if people failed to avoid unnecessary travel.

The overall official count of positive cases reached 137, including Kerala 26, Delhi 8, J&K 3, Ladakh 6 and UP 15. In Karnataka, a medical practitioner who who had attended to the 76-year-old Kalaburagi man who was India’s first Covid-19 fatality, tested positive for the virus. Meanwhile, US President Donald Trump proposed a whopping $850 billion emergency economic rescue package for businesses and taxpayers. And Modi called up Saudi Crown Prince Mohammed bin Salman, the G20’s Chair, briefed him on the SAARC meet on Covid-19 and discussed replicating it at G20 level. 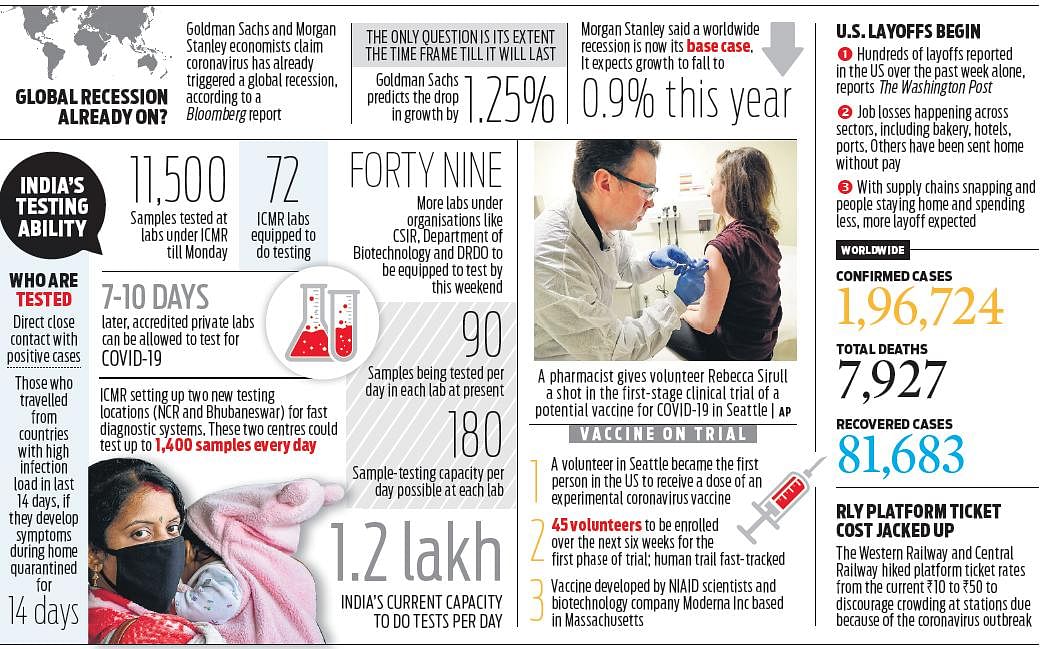 Now we are on Telegram too. Follow us for updates
TAGS
Coronavirus outbreak COVID 19