Over 1.7 million homeless residents across India struggle to fight coronavirus

Going by 2011 Census, around 13.7 million households, or 17.4 per cent of urban households, live in informal settlements

NEW DELHI: Sita, a homeless woman who lives in the streets of Delhi, learnt about the dos and don’ts regarding coronavirus when she dialled a number on her mobile phone. No government official or advisory has reached her, so far.

“Mobile company kuch kuch bolta hain (Mobile operators say something),” Sita said as she segregated waste. Pointing to her infant son in a makeshift cradle, the 19 year-old said she is optimistic he would be safe from this ‘dangerous virus’.

As the concepts of social distancing and handwashing gather momentum in the popular vocabulary, Sampati — less than a metre away from Sita —- wonders how would can “people like her” wash hands frequently.

“We drink, bathe and cook in the same water we get from the pipe. I am not educated. Dooniyan jo baatein karte hain wohi sunte hain (I come to know from what people passing on the streets discuss),” said the 23-year-old.

India has more than 1.7 million homeless residents, of which 938,384 live in urban areas. Advocacy group Housing and Land Rights Network estimates that the urban population of homeless can be extrapolated to be at least 3 million.

According to the 2011 Census data, the density of population per sq. km. is 382 persons in India. Eviction threats, lack of access to basic amenities, and absence of government interventions continue to haunt the lives of people in informal settlements.

“How do we keep washing our hands with Dettol? The kids alert us when water comes in the near-by park every two days and we go and fill up our buckets,” said Shiela at the Nehru Place MTNL informal settlement.

“We are scared too. But what can we do? We are living in cramped places in big numbers. There is no help.” 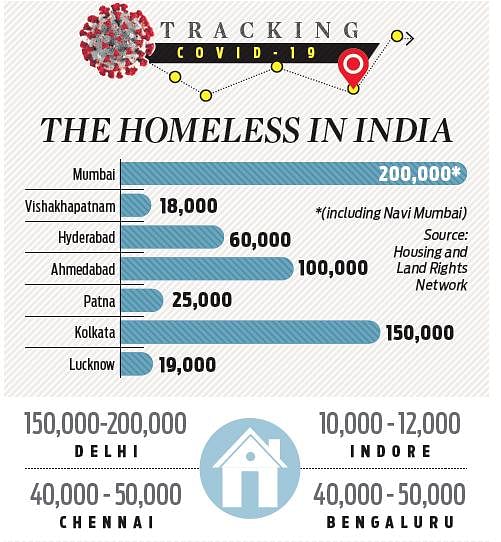 Housing and Land Rights Network executive director Shivani Chaudhry pointed out that the Census indicates that 69 per cent of Indian houses have only one or two rooms.

“A basic precautionary measure is to stay at home. But how do homeless stay at home? Moreover, it is almost impossible to practice ‘social distancing’ in informal settlements and homeless clusters and shelters.”

The homeless living in high-density areas such as shelters and informal settlements are most at risk, she added.

“The state needs to prioritise access of all for basic services, including clean, sufficient water.”

On Wednesday, the UN Special Rapporteur on the right to adequate housing urged the governments to take ‘extraordinary measures’ for securing the rights of housing in the wake of the pandemic.

“We need to talk about the liveability of neighbourhoods, and health is a very important part of it. This will help us build strategies for neighbourhoods that are at risk. For example, we know the resettlement colonies we studied in Mumbai have a pre-existing burden of TB, and hence, are at higher risk of coronavirus.

These colonies will require special attention,” said Namrata Kapoor of Indian Institute for Human Settlements (IIHS). Sunil Kumar Aledia, the founder member of the Centre for Holistic Development, said immediate interventions were required as the homeless live in close proximity to each other inside shelter homes. Providing liquid soap near public toilets, supervisory visits of shelter homes are the way forward, he said.

Delhi Urban Shelter Improvement Board member Bipin Rai said besides sensitising people on how they can safeguard themselves, the DUSIB would urge them to abide by the voluntary lockdown of shelter homes.

Additionally, three shelter homes would be made ready for people with symptoms and doctors would visit them daily.

“The government will provide them with lunch and dinner. It will be decentralised. There will be some locations from where food will be distributed and at homes where they have kitchen space, NGOs would be asked to draw up facilities there,” said Rai.

Federation of Resident Doctors Association president Dr Shivaji Dev Burman called for reaching out to the people in informal settlements. Overcrowding and inadequate hygiene measures can lead to other infectious diseases, he said.

Now we are on Telegram too. Follow us for updates
TAGS
Coronavirus COVID-19 homeless coronavirus