54 per cent of the total population of Greater Mumbai resides in slums and 89 of the 203 positive cases in the ‘Maximum City’ has been reported from such clusters.

MUMBAI: There is now a real fear that slums of Mumbai could turn out to be a big challenge in Maharashtra’s war against COVID-19,  with an estimated 54 per cent of the total population of Greater Mumbai residing in them and 89 of the 203 positive cases in the ‘Maximum City’ being reported from such clusters.

The number of positive cases detected in Shiv Sena’s youth leader and minister Aaditya Thackeray’s constituency Worli is among the highest. Out of 9 patients, 4 are from Worli’s fishermen colony, 2 from Kurla, one each from Pantnagar (Kalina), Prabhadevi and one in Govandi. The Govandi Covid positive patient succumbed to death two days ago.

Health department officials agree that Covid-19 has now travelled from upscale areas and high-rises to slum pockets in Mumbai. “We are now getting more patients from the slums and chawls of Mumbai. The four Covid 19 positive cases detected in Worli’s fishermen’s colony have neither international travel history, nor any immediate contact with positive patients. It is a matter of concern for us. All of them were using community toilets,” said a health official requesting anonymity.  “We are tracking their contacts who may have been in direct touch with them over the last few days. We are racing against time as it is a difficult task to trace people in the slums. If the disease spreads, we may not be able to control it.”

With more than half of Mumbai’s population living in some 115 slums — the biggest being Dharavi with an estimated population of 15 lakh within a 2.1 sq km area where 73 per cent of people use community toilets — the spread of the disease could be fast, say policy experts.They say, in Dharavi, the average household size was 4.5 living in very small rooms, while sharing community service points which could turn out to be major vehicles to spread the disease.

Aaditya Thackeray said Koliwada and Janta colony were sealed off. “Efforts are on to disinfect, fumigate the areas, while speeding up contact tracing,” the minister added.The General Manager of Southern areas under Brihanmumbai Municipal Corporation, in which the Koliwada- fishermen colony falls said Worli Koliwada has been completely sealed and locked for public movement in coordination with the police department.

“Disinfection and fumigation process has been initiated as a precautionary measure. All residents have been asked to cooperate by staying at home. Together, we will overcome this crisis,”he tweeted. 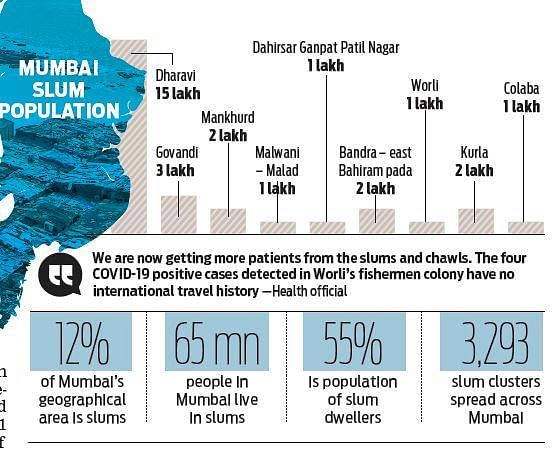 Stay up to date on all the latest Nation news with The New Indian Express App. Download now
TAGS
Mumbai slums coronavirus COVID 19