In what could spell bad news to lakhs of Indians working in Oman, the Gulf country has asked all its state-owned companies to fire all expat workers and replace them with Omani nationals.

NEW DELHI: In what could spell bad news to lakhs of Indians working in Oman, the Gulf country has asked all its state-owned companies to fire all expat workers and replace them with Omani nationals.

However, India said that the policy is not a new one and is not targeted at Indians alone.

“The policy is decades-old and is not India specific. The Omani government has assured to take care of Indians in the country. The policy does not target Indians,” Ministry of External Affairs spokesperson Anruag Srivastava said. 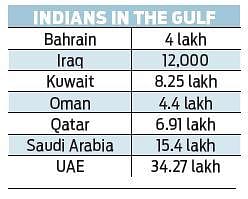 According to estimates, there are around 4.4 lakh, Indian migrant workers, in Oman with some estimates putting the number far higher at 8 lakh. The implementation of the policy is being seen as the intensification of the Omanisation project, which was launched during the former Sultan’s rule.

The order to fire all expats, was issued by the government of Oman on Wednesday as part of its financial guidelines.

As of now, the order applies only to state-run companies but workers fear that even the private sector may be impacted by it in the future.

“As of now, I am not affected by it but it would get chaotic if one day my company asks me to pack my bags and leave suddenly. The order has caused a lot of panic. Some people I know will be affected by it,” Mohammed Ibrar, a Salalah-based transport supervisor from Hyderabad, said.

The order comes just weeks after Prime Minister Narendra Modi had a telephonic conversation with his Omani counterpart Haitham bin Tariq Al Said during which he was assured that the Indian Diaspora in Oman would be taken care of.

Oman is already grappling with low oil prices and the economic slowdown caused by a coronavirus. It is a comparatively small energy producer and its debt has been rated as junk by major rating agencies.