COVID-19 crisis: Where is space for home quarantine in cities?

As per data of Census 2011, over 1.6 crore households in the country have nine or more people staying in them

NEW DELHI: The health ministry last week said most cases of coronavirus had been asymptomatic or mildly symptomatic and had advised home isolation for such people. It also said that 65 per cent cases across the country were reported from the metros and big cities. However, Census data suggests, and experts also agree, that following the ministry’s guidelines on home quarantine is near-impossible, particularly in urban households.

The guidelines on home quarantine say the person showing Covid-19 symptoms has to remain isolated in a well-ventilated room, preferably with an attached toilet. “If another family member needs to stay in the same room, it’s advisable to maintain a distance of at least one metre between the two,” it stated.

“The average distance between two houses is at least three times lesser in big cities, especially metros, as compared to houses in towns and villages. Moreover, the number of rooms in a household is greater in rural areas and small cities. This can be a hurdle in the self-isolation of people in cities,” a research scholar of population studies at the TISS said.

For instance, central Mumbai, which has a cluster of fishermen colonies, slums and chawls and is densely populated, has seen maximum cases .According to West Bengal health department officials, 264 of the 444 containment pockets across the state are in Kolkata. And the worst-hit zones are pockets of north Kolkata, which are home to 33 per cent of the city’s 45 lakh population.

In Indore, the estimated population of 300 containment zones is around 8 lakh — around 25 per cent of the district’s population. Hotspots include congested localities like Khajrana, Ranipura, . Over 1,500 people have tested positive in Indore while 76 deaths have been registered.

Data shows over 1.6 crore households in India have nine or more people staying in them. Of this, around five lakh households are ones with a single room. The highest number of such households, 1.44 lakh, is in UP, followed by Karnataka at 60,937.

“India is a highly populated country and population density in cities is far higher than rural areas. Also, personal hygiene is something which is not taken seriously in India. These are all ingredients for the rapid spread of communicable diseases. With coronavirus, distancing is surely an issue. Self-isolation in India is a difficult task because of the concentration of population in certain areas,” a fellow at the Indian Institute of Human Settlements said.

Doc echoes expert view
A doctor pointed out at lack of space. “Some areas don’t even have the space as prescribed by authorities. The chances of spread of infectious diseases is higher in such areas,” a Hyderabad-based pulmonologist, said. Self-isolation becomes a problem, he said. “In some places,  more than five people stay in a
single room.”

Affordability a headache
The norms ask people to have a care-giver available with them round-the-clock. “Most people living in crammed areas are not financially equipped to avail the services of a care-giver. The governments are trying to provide such services but their is not adequate healthcare workers,  patients,” said an IIHS fellow.

With inputs from Sudhir Suryavanshi in Mumbai, Anuraag Singh in Bhopal and Pranab Mondal in Kolkata 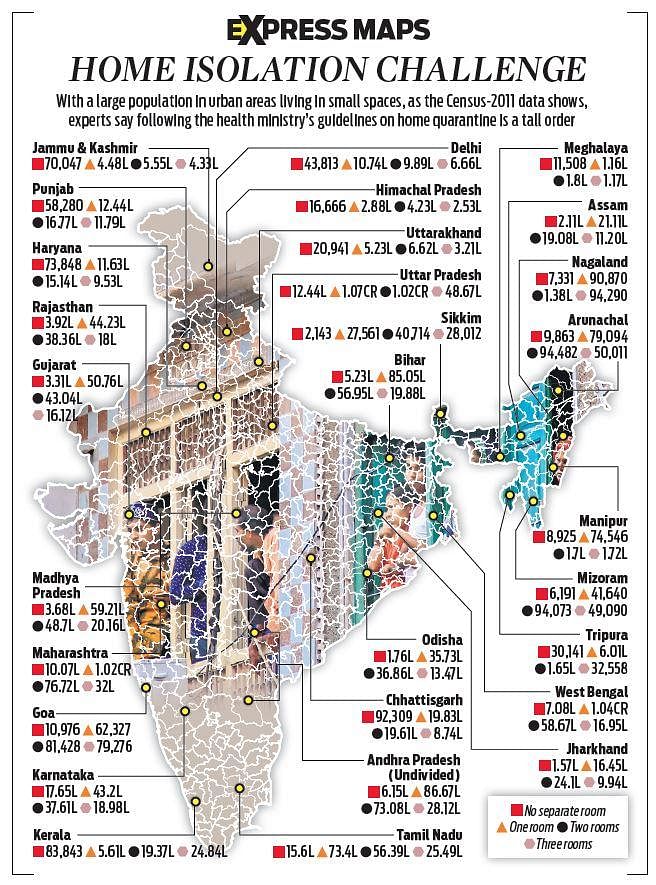