Migrant movement allowed or not? Home secretary says transport only for those stranded just before lockdown

NEW DELHI: Relaxations to the inter-state movement of migrants are only to facilitate “distressed stranded persons”, the Union Ministry of Home Affairs (MHA) said in its latest advisory on Sunday to all states. But the way it was phrased could lead to confusion among state governments over who is eligible to move and who is not.

There was also some confusion over the definition of “distressed persons” — whether it is limited to people living in relief camps or does it include those visiting camps for food.On April 29, the MHA had issued an order allowing movement of migrant workers, pilgrims, students and other persons stranded at different places due to the lockdown. Sunday’s advisory-cum-clarification added a new clause: “It is clarified that the MHA orders are meant to facilitate the movement of such stranded persons, who had moved from their native places or workplaces, just before the lockdown period, but could not return to their native places or workplaces on account of restrictions placed on the movement of persons and vehicles as part of lockdown measure.”

In his communication to all states and Union Territories, Union Home Secretary Ajay Bhalla said the facility envisaged in the orders is meant for such distressed persons, but does not extend to those categories of persons, who are otherwise residing normally at places, other than the native places for purposes of work etc., and who wish to visit their native places in the normal course.

Quite a few states have already started sending migrants in bus and train loads, the best performer among them being Rajasthan. Compare that with Kerala where 3.6 lakh migrants sought transport and around 13,000 have already left in 12 trains, but officials reckon it would take two months to send all of them home in a staggered manner, and you get a sense of the pace at which Rajasthan is operating.A 21-day lockdown was first announced by Prime Minister Narendra Modi on March 24 in a bid to combat the coronavirus pandemic. It was extended up to May 3 and again till May 17.

1 lakh leave  Rajasthan
Of the 6 lakh migrant labourers in Rajasthan who wanted to go, around 1 lakh have already left, making it the most efficient state in offering transport 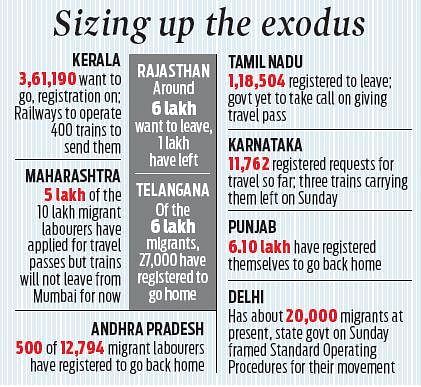