MGNREGA job applicants have to first generate a job card number by registering with portals run by state governments.

NEW DELHI: The monthly demand for rural jobs under the Mahatma Gandhi National Rural Employment Guarantee Act (MGNREGA) has touched a new high at 3.95 crore until May 20, with analysts saying it will most likely cross 4 crores by the end of the month.

This is significantly higher than the month-wise demand this year, which was 2.48 crore in January, 2,92 crore in February, 2.70 crores in March and 1.77 crore in April, according to the Ministry of Rural Development data. It is also much more than the monthly average demand of 2.3 crores in 2019-20. 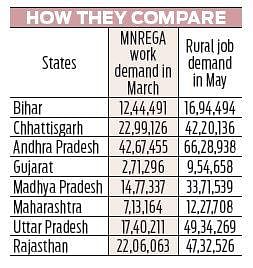 The spike in May this year is indicative of the huge job losses all around, particularly in the informal sector, where lakhs of workers have suddenly become unemployed owing to the lockdown.

“Obviously the lockdown has had an impact. When industries cease to function, where will the workers go? The high number of people seeking work under the MGNREGA is due to desperation. Most of these workers have gone home and have no work hence they are seeking jobs under the scheme,” said Tajamul Haque, a former Niti-Aayog member.

An analysis of the data shows there is a spike in demand for MGNREGA jobs in May-June when the sowing season for kharif crops is set into motion. But never has it crossed 4 crore, which is most likely this month, in the past five financial years. The previous highest was in June 2016-17, when the number of rural job seekers was 3.68 crore.

The data also shows that states which have seen reverse migration of workers have seen a sharp rise, most significantly in Uttar Pradesh. The total number of applications in UP was 17.4 lakh in March and 12.7 lakh in April. This jumped to 49.3 lakh until May 20.

The corresponding figures for Madhya Pradesh were 14.7 lakh, 11.3 lakh and 33.7 lakh. Surprisingly in Bihar, where also lakhs of migrant workers have returned, has not shown such a sharp rise. It was 12.4 lakh in March, 9.3 lakh in April and 16.9 lakh in May this year.

The increasing demand for MGNREGA jobs only seems to confirm what many organisations have projected about unemployment. According to the Centre for Monitoring Indian Economy, rural unemployment rose from 8.49% in March to 22.67% on April 29.

MGNREGA job applicants have to first generate a job card number by registering with portals run by state governments.

After that they have to submit their applications in writing to gram panchayats. Even as the demand for job cards has risen, the number of active MGNREGA workers has seen a fall since March. Active workers are those who are involved in some activity under the rural scheme.

While the number was 18.1 crore in March, it fell to 11.85 crore in April and has increased to just above 12 crore in May. Analysts attributed this to fear among the workers of the coronavirus and many states not starting rural activity.

Haque said the demand would rise in the future and urged the government to upgrade and set up rural medical infrastructure.

“There needs to be some amount of flexibility to ensure that more people are roped in,” he said.

An ex-union agriculture secretary said the additional Rs 40,000 cr allocation for MGNREGA would boost scheme. “It will instill confidence in workers that there will be no problem in payments,” he said.